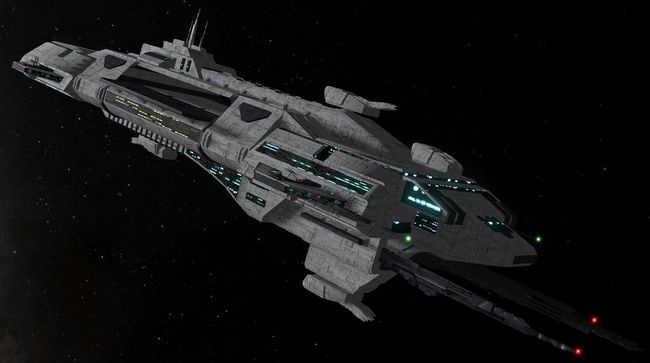 After the first 'Vigilant' and 'Adamant' class cruisers were built and launched and after it was decided that cruisers will no longer play in direct engagements but limited to escort and tactical role, Admiral Cartwright lobbied to the GTVA High Command to contradict their idea about the standing purpose of military cruisers. He insisted that there will be scenarios where destroyers or corvettes will not be readily deployed and a real possibility of an emergency when a quick response is required. The need of a tactical and rapid response cruiser wing is clear. A cruiser fleet that can engage large enemy vessels if necessary. Since the 'Vigilant' and 'Adamant' cruisers can already fill that purpose, a command ship that can coordinate the group's efforts is required. The GTVA High Command approved on his appeal and developed the 'Dauntless' cruiser. The ship is equipped with the latest long range sensors and advance warning systems. It has a fighter bay that can deploy 2 to 4 four wings of fighters or bombers. It is also armed with 3 dual-mounted Antimatter Cannons. The current model has an additional mounted rotating beam cannon.

Attentive modpack builders may recognize this model as an earlier iteration of the UEM Florence from WiH. As it was discontinued, Aftermath is now the easiest way to procure this model.