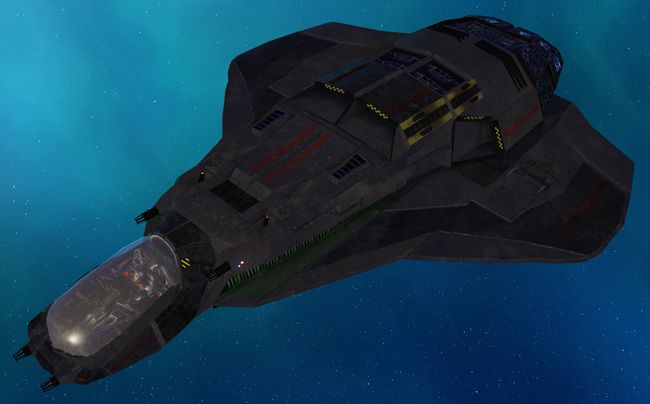 The Pharaoh is Terran design by LNG Corporation with heavy Vasudan influences. It was orignally intended to be a full hybrid, but as developers planned, it became a Terran machine with Vasudan engineering. The Vasudan influence is evident in the engine, while it produces a top speed comparable to that of the Aurora Interceptor, When afterburners are lit, the top speed greater than the Aurora is achieved. Accelleration is extreme,especially in afterburner, howver this accelleration and increased top speed come at a price. The price is fuel consumption. Engineering wizardry allows for afterburners to recover at an increased rate, and this somewhat balances the drawback of the afterburner system. Manouverability is good in both Y and Z axes,and absolutely hot in the X axis. In a dogfight, the Pharoah is equally adept and running slash attacks, or a turning fight. Shields are slightly on the weaker side of standard interceptor range, however this is compensated for by her advanced composite armor, which is slightly stronger than standard. In all, the S.O.C. next generation interceptor should perform her duties admirably. Rumor has it, that LNG is upscaling the Pharaoh for a B variant, while details are sketchy at best, the B variant is slated to be a Fighter/Bomber.