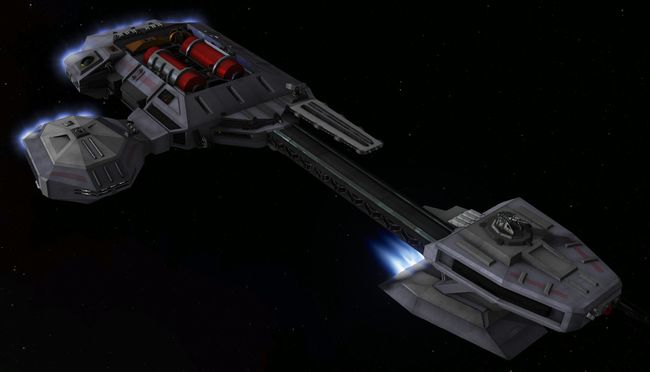 The Orestes project grew as a direct result of the Colossus project, which proved tragically the danger of having damaged or disabled vessels on the battlefield. The GTR Orestes is a capital ship repair vessel, designed to perform in-field repairs to damaged ships, or rescue damaged or disabled ships from a battlefield. It carries fuel, spare parts, skilled personnel, and even extra ammunition for flak cannons and missile launchers. Given the Orestes' hazardous working environment, often on or near the front lines of a battle, it has been equipped with relatively high grade armour for its size, and a significant number of turrets for a non combat ship, making it somewhat more dangerous to attack than a similar sized freighter or transport. However, the Orestes' true shining points are its engines. Designed to pull vessels up to twice its own considerable mass, an empty Orestes is capable of speed comparable to that of some of the GTVAs heavy bombers, and has 3 separate Engine subsystems. Fully laden though, the Orestes is considerably slower. The Orestes was designed to pull large cruisers, though in a pinch, can tug Deimos Class Corvettes. This requires the diverting of power from weaponry systems however, and the Orestes is incapable of a subspace jump in this condition.

Be advised that although the Orestes in TI ships with specific dock points for the Aeolus and the Mentu, they actually also modified the Aeolus and Mentu pofs to match. You will not obtain the same results with the regular MVP pofs.