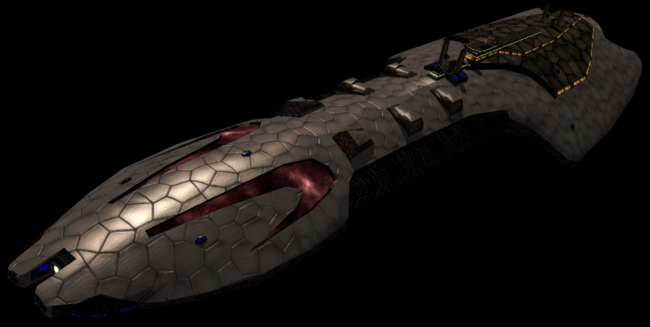 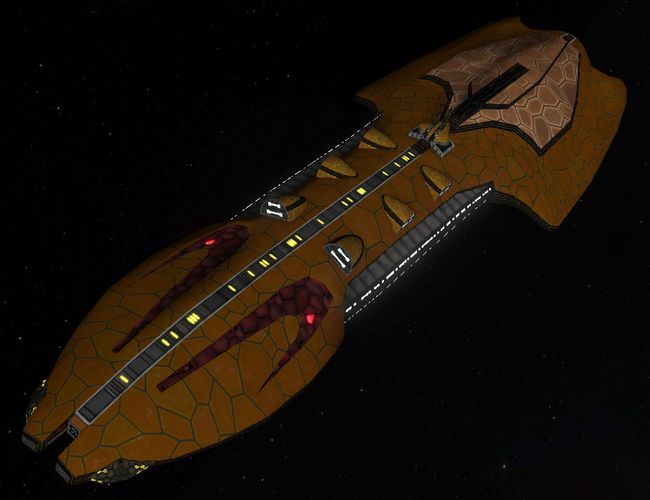 The GVMCv Wepwawet is a Vasudan long-range missile corvette.

Initially envisioned as a next-gen corvette with long-range missile capacity, the Wepwawet went trough some changes during its design. The first blueprints included 4 turreted Fury MK IV missile launchers and 4 beam cannons, but after the Fury MK V was introduced the plans were altered. The Wepwawet became a long-range missile platform with as many as 12 missile launchers. It had to sacrifice armor and heavy beam weaponry for missile storage, but the long-range destruction it can unleash is worth the sacrifice. It has only one weak slash beam and should be kept out of close combat at all cost.

The Wepwawet is a Vasudan heavy transport, designed to ferry Ambassadors, diplomats and members of the royal court in comfort and safety. Developed in response to the enhanced threat environment in the wake of the Neo-Terran rebellion, the Wepwawet is the fastest and best defended transport ever developed by the Vasudan navy, outclassing its nearest equivalent, the Terran Argo, in almost every respect. Its twin, cruiser class anti-fighter beams and their supporting turrets are capable of repelling basic fighter attacks, and its hull is strong enough to withstand a moderate amount of punishment. However, the Wepwawet is no warship, and remains vulnerable in the event of a concerted attack. Given this, and the significance of the individuals that typically make use of these vessels, they are rarely seen without a sizable fighter escort.

This ship has to be running if its target has good AF defences...most missiles won't make it through, so it takes a while to kill the enemy and during that time it has to keep its distance.

If you're used to cycling through your bomber targets by pressing 'B', you'll be bothered by all the targetable missiles this one keeps launching. Removing the "bomb" flag from the missiles' table entries will help, but it will make this ship even more powerful, since its missiles will no longer be destroyable. Toning down the missile's performance (damage, firing rate, etc.) will help balance out this change.