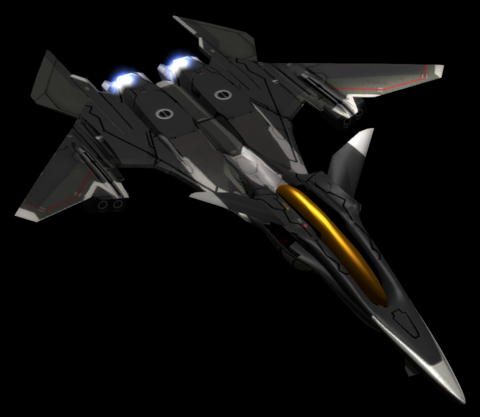 The personal fighter of Alliance ace Senya Irisviel, the B/SX22-FRX00 Yukikaze Custom, 'Mave', is the designation for the original prototype of the Yukikaze line of stealth interceptors. The Mave served as a testbed for the high-output concealed vernier system and the two Super Phoenix Mark-11 sub-orbital capable, heat-masking, high-impulse fusion thrusters that were incorporated into the Yukikaze. The Mave has been retrofitted with dual concealed four-barrel rotary cannons and missile pods. While lacking the active stealth system of the Yukikaze, the Mave is lighter, faster and features a unique modular cockpit system. An ejectable, specialized AI module or two-pilot module can be mounted interchangably to facilitate diagnostics and testing. The Mave's combat specifications is rated higher than the Yukikaze, but the only Mave produced is expected to remain alone due to Yukikaze sales and the cost associated with building such an extreme spaceframe.

The Mave's primary weapons bank actually consists of two sets of four stacked firepoints, designed to be used with cycle-type weapons. Normal burst-fire type weapons will not appear correctly as projectiles will be stacked.