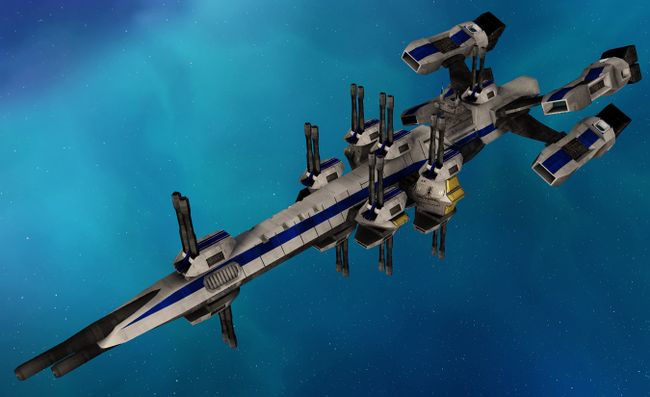 An age old relic of the golden age of the Homeworld Empire, the majestic Hurricane V series of super capital ships mark the might and power of the Homeworld Empire. At 6km long each, the Hurricane Vs are not only the largest in the Empire's arsenal, but also the only super capital ships in the galaxy to be mass produced to a degree. Although fitted with the most powerful weaponry at the time, the Hurricane V series has sadly seen the end of its days. The launching of the new Typhoon Class has removed the massive battleships from the coveted role of flagships and are reduced to nothing but cannon fodder... albiet terrifyingly DEADLY fodder. To further mark the end of the V series, the first of the new VI series is nearly ready to replace the aging V model. At the very least, it is expected that the new VI model will reclaim the title of Flagship from the smaller Typhoons. A Hurricane V is a specialized capital ship killer. Equipped with fourteen double barreled plasma cannons, it can project enough firepower in a single direction to shred virtually any known opponent in the galaxy barring Jha 'Oull Siege Ships and Taimari Dreadnoughts.

No table provided. Ships with a 6km and 600m versions.