Note: Please update the version when the page is updated. If your edit had nothing to do with new code entries then please do not edit the version

Team Loadout has been improved to allow the use of variables as well as numbers to determine how many ships will be available and if any weapons are required for the mission. The heart of the new system is the updated Team Loadout panel of course.

Another new feature is having a weapon required for the mission without locking the entire loadout. This feature however does not yet have a FRED dialog and must be done in notepad. FRED does, however, understand the syntax and won't delete anything if you resave the mission in FRED. The syntax follows...

and must be placed just after '+Weaponry Pool:'

NOTE: This feature simply requires the weapon to be somewhere in the loadout and not necessarily on any particular ship. 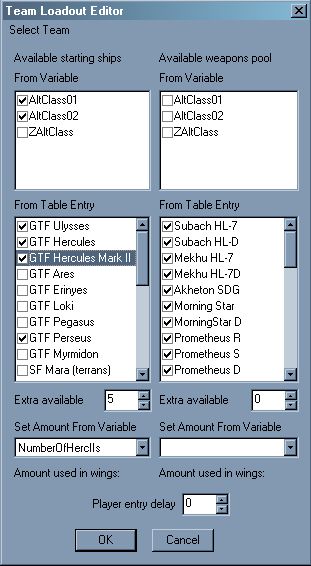 The most important addition is the Set Amount from Variable. The list presented to the player shows all the available number SEXP variables. In the example shown the NumberOfHercIIs variable has been set to 5, but since this is a persistent variable, any previous mission could set this to another number.

The From Variable list gives you access to another powerful feature. Not only can the number of ships available be set from a variable. The class of the ship itself can also be set from a string variable. That means you can determine the loadout of one mission in the one preceeding it.

The Team Loadout Editor only affects the number of ships that will be available in game but it won't touch the ships that have been specified in the mission file by default. If you set up Alpha wing to consist of 4 GTF Ares that's what you will get by default. If, however, you go to the Ship Editor and select the Set Class Dynamically the ship class will be set based on what is left in the Loadout.

For every ship that has the Set Class Dynamically box ticked the game does the following : -

Note that the game does this for every ship that has been told to Set Class Dynamically not just Alpha, Beta and Gamma wings. It is quite possible to use this feature to set the class of any ship in the mission (although using it with anything other than ship classes that the player can fly is pointless) 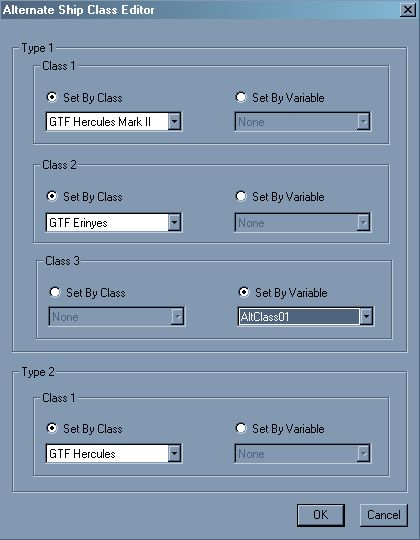 The Alternate Ship Classes Editor gives the mission designer a way to fine tune which ships will be selected by the game. Alt Class Type 1 acts as a suggestion. The game will try to set the ship class to that if there are any ships of that class remaining. Alt Class Type 2, however, is more of an order. If one of these is given that will be the ship class that the ship ends up with if it couldn't find a match earlier on. Note that Alt Classes are completely optional.

Here's a run down of what will happen for the ship that the Alt Ship Class Editor pictured above belongs to.

Setting Up The Next Mission

When it comes to setting up the team loadout variables, you have several options. You can roll your own events to set up everything, but this could get tedious. Work on constructing SEXPs to alter the the loadout depending on ships which departed or were destroyed are on their way. Till then the deal-with-ship-loadout will automatically sort out the loadout variables for any destroyed ship that had set the Team Loadout Store Status box clicked for it. Don't release anything using this SEXP, though, since it is subject to change or removal.