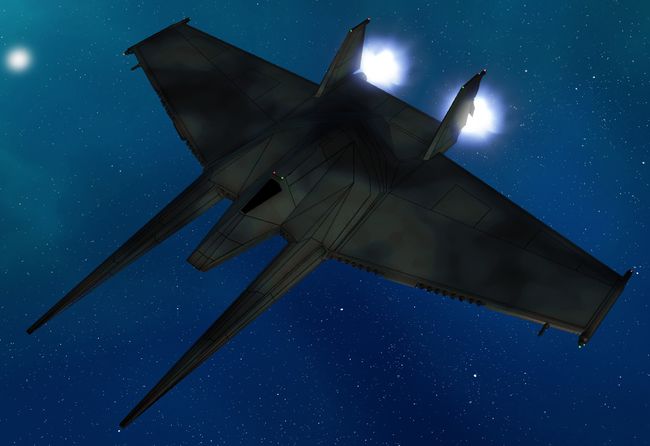 The Ironsides was designed in 2613 as a heavily armed AeroSpace Fighter. Its manufacturer, Brooks Incorporated, offered 500 prototypes of the design to any command that wished

to field test the design, as such, examples of the Ironsides were deployed by the SLDF as well as every Inner Sphere power and even the Rim Worlds Republic.

Though a costly ploy for the company, the result was a fighter field-tested in a variety of environments and situations, resulting in the production model having few if any bugs.

As a medium-fighter, the Ironsides is lightly armored with eleven and a half tons of StarWeave standard armor, but it carries impressive firepower for its weight class.

This is thanks in part to the IRN-SD1 engine, which uses an alignment system to shift the engine's position relative gravitational and velocity influences, to produce an design more compact than others while having the same power-to-weight ratio.

The craft's only other design flaw was an inadequate cooling system of only ten Double Heat Sinks and limited ammunition stores, lending the Ironsides for use mainly in quick-strike missions thanks to a devastating first-strike capability.

As is true elsewhere, production of the Ironsides would suffer during the Succession Wars, with an initial five factories reduced to one by 2910.

The Carver V plant would eventually be shut down as a cost-saving measure, and by 3050 most Ironsides still located within the Inner Sphere were family heirlooms or museum pieces.

The Carver factory would be reopened by the Word of Blake at a later date to produce superior variants to fight in the Jihad.