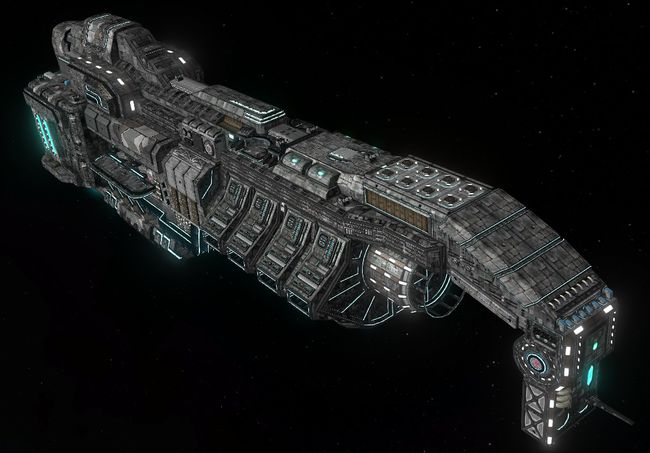 The history of the Abraham colony ship, originated as a heavy fleet carrier, dates back to the decisive moments of the final stage of the Rim Conflict. The Battle of Ceres resulted in tremendous damage being taken by the EFN fleet resulting in an opening for the ORS offensive of the Inner Rim. With Syndicate ground forces advancing on Mars and strike wings performing long range raids on Federate installations orbiting Earth itself, the Magistratorium and ORS High Command began to plan for further expansion after the Federation was defeated and Syndicate domination in Sol was unquestionable. They requested a ship that would be centre of operations for the entire Solar System and beyond if subspace connection with Delta Serpentis or any other system was established. This task was dedicated to joint consortium of Massive Dynamic, Bamyian Development Corp and United Heavy Industries. The result was the Abraham supercarrier.

Six supercarries were under construction at the time when the Shivans invaded. After the Syndicate's attempt to stop Shivan progress at the Beta Volantis jump node failed, Fleetmaster Caliphtys issued an order to secretly retrofit the Abrahams as colony ships - real floating cities and safe harbours for survivors from destroyed planets and space stations. The Syndicate's primary shipyards and unlimited resources from their orbital depots were assigned to this deadly race against the clock and managed to deliver three out of six colony ships before they were overrun. Ark-01 Abraham, Ark-06 Adrastus and Ark-02 Inquisitor - later renamed to Spirit of Hope - were then directed to most densely populated ORS worlds with a simple goal - collect as many survivors as its cavernous hangarbays and numerous decks could accommodate. These vast numbers of people were later segregated according to their skills. Engineers, medics and other kinds of specialists were assigned to work on board the colony ship or other vessels and the others had to be put in hypersleep.

With cavernous fighterbays, factories and advanced command facilities replaced with extensive agral decks and numerous hibernation capsules, the Abraham-class carriers are now officially classified as colony ships and became the absolute centrepieces of the Syndicate Colony Fleet. Each contains 150,000-200,000 hibernation capsules and more than 30,000 active personnel. The Colony Ships provide 80% of food and water supplies for the fleet, advanced medical help and a home for the majority of civilians living in the Colony Fleet. Despite the intensive efforts of shipyard personnel, none of the colony ships' retrofits was ever fully completed and many of their decks remain unused and and without an atmosphere. Preparations to use these decks are carried out slowly as the colony ships are almost constantly on the move and under threat of the Shivan attacks. According to optimistic estimates it will take at least nine months to complete all planned retrofits and supply the entire fleet with sufficient amounts of food. As homes to more than half the fleet's population the colony ships constantly remain under the vigilant guard of Escort Fleet's autonomous unit - Heavy Fleet under the command of Fleetmaster Aasira Raji.

The colony ship Spirit of Hope was selected as the political capital of the Exodus Fleet and the seat of the re-nominated Syndicate Magistratorium lead by High Magistrate Muhammad Al-Zardari. The apocalypse did not make the Syndicate's political factions disappear and their interests and influences are concentrated here. The Upper decks are mostly occupied by the Magistratorium's administration and a team of scientists called Navigators who use a powerful cluster of quantum computers to select the path for the fleet under the guidance of High Magistrate Al-Zardari. The Spirit of Hope has also become a cultural and scienfitic centre of humanity, home to science labs, research centres, cinemas, theaters, seat of the corporations, churches and non-government organizations.

Capital-sized, armed with tons of blob turrets but actually effectively defenseless against both bombers and enemy capital ships. Large health pool makes it dying slowly, but believe me, it will die if you leave this large ship unprotected. Abraham has lots of spots which looks like fighterbays and 8 actual subsystems. Only 01, 02, 03 and 04 are functional and equipped with fighterbay paths. Even large deck it uses in m04 of ItDW campaign is actually not even a subsystem.