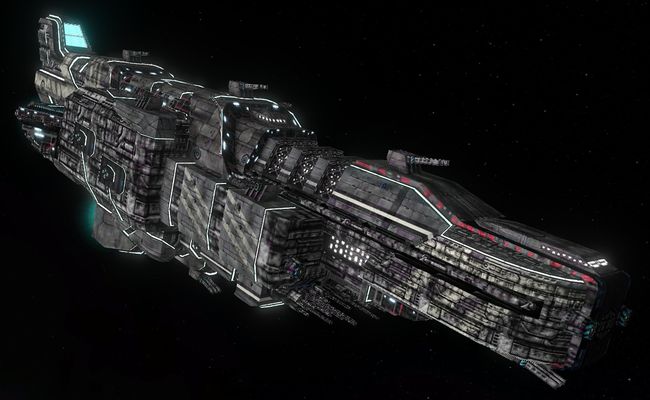 The ORD Galahad in Exile 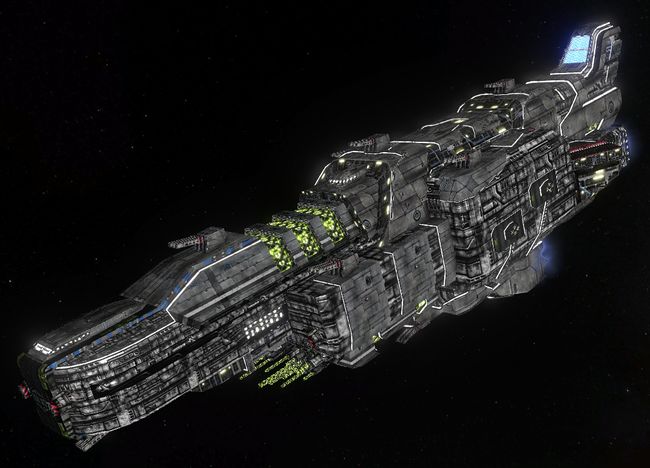 The GTSD Arashi in ED

A huge joint project of Bamiyan Development Corporation, United Heavy Industried and Massive Dynamic and the ultimate response to anything that threatens the Syndicate's domination in space. The Galahad destroyer is the most powerful warship ever constructed in the Solar System. Classified as a destroyer, although significantly exceeding its standard parameters, this 3,1-kilometre-long behemoth is comparable with the Lucifer in terms of size, primary weapon configuration and fighting capabilities. High Fleetmaster Glenzmann, ORD Lazarus requested a new destroyer for the Syndicate after Valhalla Station was retrofitted with a next generation shipyard finally able to construct capital ships. The Galahad is designed to be the response for EFN's Praetor battlecarrier, to outmatch it in almost every aspect and match its legendary fighterbay capacity. The Galahad has everything it needs to be a mobile command centre for the entire fleet. At the same time, it is a superheavy siege platform, intended to unleash hell on any Federate installation or stop any offensive on Syndicate worlds and crucial sectors. No single Galahad was ever destroyed by Federation forces, despite their numerous, ruthless and futile attempts. The first constructed warship of this class, the ORD Thor under command of High Fleetmaster Christopher Glenzmann became flagship of the Syndicate First Fleet and the entire Outer Rim Syndicate Navy. It was destroyed in a desperate stand against an overwhelming Shivan armada laying siege to the ORS capital world of Europa.

Despite being heavily influenced by the Orion destroyers, the Galahad has little in common with any Great War-era design. This superheavy warship is a monstrosity in terms of firepower, covered by almost inpenetratable titanium reactive armour plating. The main tools of destruction wielded by the Galahad are rapid-firing Maul rail cannons including seven triple-barreled railgun batteries in a crown configuration supported by four Revenant torpedo tubes and four spinal heavy Maul-B batteries for strike missions. The Anti-fighter screen of the Galahad is more than twice that of the Orion's. As a dedicated flagship class, it is equipped with a cavernous hangarbay housing up to 50 wings of fighters and bombers. The destroyer shares the reputation of almost the perfect warship along with the Tychicus-class heavy frigate, and despite extremely high production costs, the Syndicate constructed seven Galahad-class warships.

The majority of these fearsome warships including the Thor itself were destroyed during the Shivan invasion. Two surviving Galahad-class destroyers - ORD Demetrius, former flagship of the 2nd Jovian Fleet under the command of Fleetmaster Hector Caliphtys and ORD Anjaneya, the centerpiece of the 4th Neptunian Fleet commanded by Fleetmaster Aasira Raji later formed a backbone of Escort Fleet. The Demetrius and Anjaneya remain the most powerful warships in Exodus Fleet and along with sole remaining retrofitted Orion class destroyer - ORD Ironclad they are the absolute centerpieces of every major operation against the Shivan threat after the Great Exodus.

I balanced Galahad akin to UED Solaris, but also I wanted to correct some flaws of my inspiration. Although Galahad is equipped with multiple launchers of swarm torpedoes, it's main advantage are countless, rapid-firing railgun turrets in crown configuration. Like majority of ORS warships, Galahad lacks any form of burst damage. Instead it is slowly projecting firepower from many low-damage turrets to provide stable, sustained source of damage. Very few blind spots, dense anti-fighter screen and 2,5 times HP of the Orion makes Galahad potent duellist and battleship. Decentralized nature of it's armament render it hard to disarm and and highly resistant against bomber strikes. 4 spinal, heavy railguns provide limited option for some opening volley, but it's little compared to Shivan destroyers or even GTVA capital ships like Hecate.