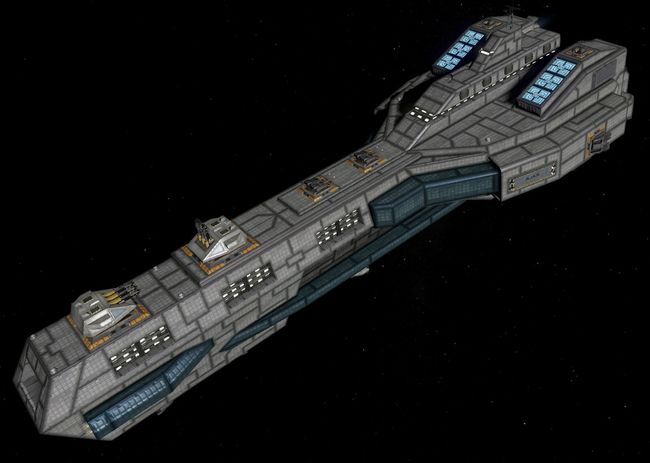 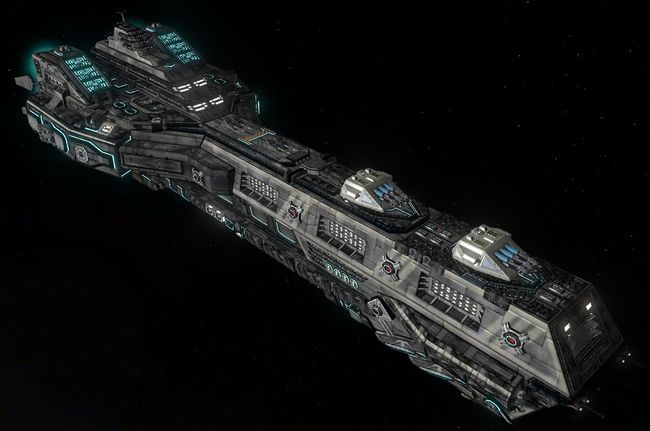 The Diemos is the current replacement for the Murphy class destroyer. It provides both anti-fighter and anti-cap ship support making it an ideal escort ship.

A signature warship of the Outer Rim Syndicate, the Vitalius-class frigate was developed shortly after the Secession War. The Syndicate fleet secretly formed by rebel colony governments and allied corporations consisted of old Great War-era cruisers, several remaining Orions and pre-Great War relics including Zagreus destroyers. Despite a costly victory in the Secession War, the ORS suffered heavy losses confronting the numerous Earth fleets and was in desperate need of a new generation of warships to ensure its domination in the Outer Rim. Bamyian Development Corporation, one of the top ORS supporters and founders designed the Vitalius with versatility in mind. Without any shipyard able to construct ships longer than 1 km, High Fleetmaster Glenzmann of the ORD Lazarus requested a new warship class able to be constructed in the small shipyards spread across the Outer Rim. As the first ship since the end of Unification War clasified as a frigate, the Vitalius wields firepower exceeding the old Orion class of its time despite being only half its size. It has become the backbone of the Syndicate fleet and a base for every major military operation in all three stages of the Rim Conflict. 258 Vitalius-class frigates were ever constructed in Syndicate shipyards and almost 150 survived till the beginning of the Shivan invasion.

After the Exodus, the Vitalius remained a backbone of the Exodus Fleet with her heavy rail cannons, Revenant spinal torpedo tubes and fast-recharging jump drive. Despite being equipped with intersystem jump drives, the Vitalius was designed to perform only short range missions inside the Solar System. The small cargo space onboard is places a limit on its operation range, making the Vitalius fully dependent on the supply ships. The majority of the remaining frigates of this class were assigned to constantly assist Colony Fleet ships and even the ones forming the battlegroups of the Roaming Fleet require logistic support to carry out military operations far away from the rest of the fleet. Altough the Vitalius is equipped with a hangarbay able to maintain three wings of fighters, only 35% of the frigates in active service have a fighter compliment onboard. Replenishing the fighter corps on destroyers and carriers is a higher priority, often rendering even the most notable examples of this class without any internal fighter support.

The Vitalius is similar to the Deimos or the Karuna. It's based on large amounts of fast-firing railguns and swarm torpedoes so it's projecting the firepower in a stable, sustained way without a noticeable cooldowns. Especially effective against lightly-armed targets, like the Cain or the Rakshasa cruisers. It's lacking any form of burst damage, so it's not the ship you want for shock-jumping enemy warships. Instead you can safely deploy the Vitalius to a long knifefight with enemy cruisers and corvettes and enjoy the show. The Vitalius performs excellently at short and medium range, but its spinal Revenant launchers also have considerable range. Tons of blob turrets cannot save it from enemy bombers on their own, but will provide significant assistance to escort fighters. Its point-defense screen was designed to provide assitance at close range, so if you can strip enemy bombers of their shields, swarms of blob turrets will tear them apart surprisingly quickly.