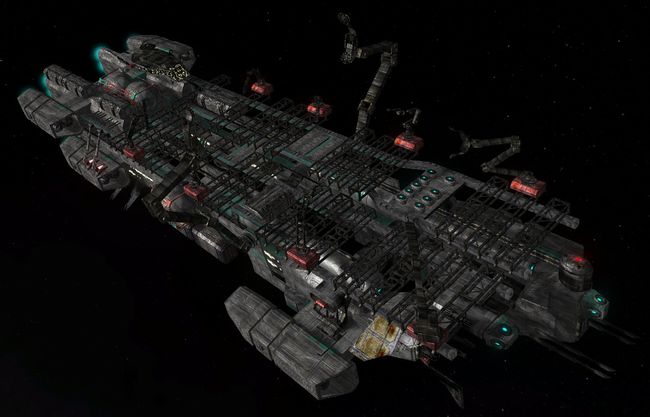 The Qadesh is a vessel unique in the entire history of human space exploration, a true product of desperate times requiring an unconventional approach. During the Martian War the Earth Federated Nations' military invaded the Outer Rim with full force and introduced an aggresive bombardment strategy commenced by both bomber raids and capital ships. The Syndicate turned out to be unprepared for EFN forces targeting planets and orbital installations on such a scale and the first weeks of fightings brought disastrous damage done to ORS industry and its production potential drastically diminished. In order to turn the tide ORS High Command introduced a plan to make the most vulnerable elements of industry independent from planets and their closest neighbourhood. With long and devastating warfare on Mars, the Outer Rim mobile shipyards and factories turned out to be the factor that led to the Syndicate's victory.

The Qadesh is fully capable of producing ships up to frigate size and performing repairs of ships up to destroyer configuration even in combat conditions. It has an optimal crew of 2,000, but basic repairs can be performed with only 500 crewmembers. Only one mobile shipyard - The Big Buddha survived the invasion and since the Great Exodus it has always had the durty job of repairing Syndicate frigates that took damage in engagements with the Shivans. There is a popular saying among Big Buddha's engineers that 'if there was no Roaming Fleet frigate to repair in three days, the fleet is either safe or completely fucked up'