This is the stub page for the PCS2 Help Cooperative authoring. Please add all pages to the PCS2 Cooperative Authoring category.

Once this project is finished, it will be exported and included with PCS2 releases as the official help.''

The POF Constructor Suite 2 (PCS2) allows modification of existing .pof's as well as creation of new ones from OpenCOLLADA .dae's. The geometry, texturing, and UV mapping is done by modeling software such as Blender or 3DSmax, while PCS2 focuses converting the model into a format usable by FS2 and adding/editing additional data used by the game.

There are numerous tutorials on rigging for FSO using PCS2:

PCS2 can be used to define/edit all meta data (as in non-model data) needed to get a usable POF file. If in doubt, look at an original Volition POF file for reference on how to set up your model.

The x/y/z coordinate system in a POF file (and therefore PCS) is probably different from what you're used in your modelling tool. In relation to the forward-direction of the model: 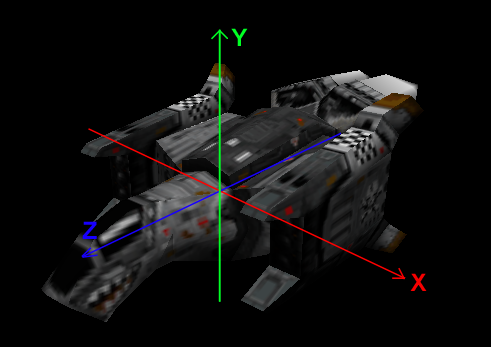 The Header group contains the LOD and Debris list which points to which model as being the respective LOD and debris (The models themselves are contained in the SubObjects group). The Header group also contains physical values (such as mass and moment of inertia) and other assorted values, all shown on the right editing pane.

The values can be edited/saved if needed. Use the "Reset" button to recalculate the value based on model geometry.

This value determines the center of mass of the object, and is namely used as a pivot point by the game engine to turn/rotate it during movement and collisions.

This is the maximum distance between any point on the craft and the craft's center. It is used for scaling subspace effects and default scaling in the tech room and target view. PCS2 automatically calculates this value based on model geometry.

The values can be edited/saved if needed. Use the "Reset" button to recalculate the value based on model geometry.

Mass of the ship. Used in physics calculation in ship-to-ship collisions. The used unit is unclear. It's best too look at a Volition model of similar size for reference when defining this value for your model.

From the POF data notes: "mass is an area mass conversion: area_mass=4.65*(vol_mass^2/3); also scale moment_inertia by vol_mass/area_mass (*) if there is no cross_section data, num_cross_sections is -1 instead of 0, as one would expect."

Define Level-of-detail models from LOD1 (used up close) to LOD4 (used far away). Define/edit the number of LOD levels with the new/edit/delete buttons in the "Select" list. Volition models have 4 LODs as standard, but you can use less (with fs2_open also more) than that.

Define debris chunk models (which are spawned when the ship is destroyed).

If your model naming scheme follows the PCS2 standard (debris01, debris02, etc.) PCS2 will automatically assign them as debris chunks.

A list of points used to scale the explosion effects during the death-roll/explosion animation of capital ships. Each point has a "Depth" value and a "Radius" value.

Volition POFs of capital ships typically have a list of 25 cross-section values. Note that if this is not set, the game will use default values instead.

A symmetrical 3x3 matrix that defines the moment of inertia (or rotational inertia) for an object. This defines how much torque is needed for a desired angular acceleration about a rotational axis. This property is given by the shape and mass of an object (specifically by how much mass is located how far away from a given rotation axis), see also https://en.wikipedia.org/wiki/Moment_of_inertia

In FS2 this is used for physics calculations when ships are hit by beam weapons. Beams impart a force that "pushes" on a ship, and if the beam does not hit exactly the center of a ship, this force creates a torque (=moment) on the ship (causing it to rotate). Note that the values seem to define an inverted value for the MOI, meaning that smaller values correspond to higher MOI. Setting all values to 0 results in a POF that does not rotate when hit by beams.

PCS2 offers the option to "Recalculate" the MOI based on model geometry. And while it claims to not be very good at it, the results are usually usable (but typically lower than on Volition models). If more accurate values are needed, it's best to copy the values from a similarly sized/shaped Volition POF.

This shows a list of all the subobjects present in the POF, including the hierarchy. The layout/hierarchy is defined from the source model that you imported into PCS2. You can delete/copy individual subobjects and re-arrange the hierarchy by dragging/dropping subobjects in the navigation pane. See also: https://wiki.hard-light.net/index.php/Tutorial_-_PCS2_Kitbashing

Some remarks about the required hierarchy and naming conventions: 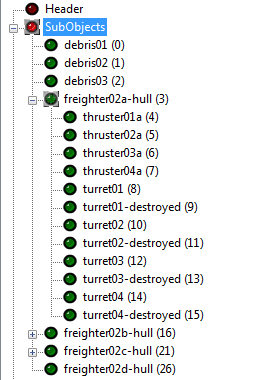 For each subobject, the below listed values are shown on the right side:

Guns (primaries) and missiles (secondaries) are organized in banks, which is a list of firing points, each of which uses the weapon selected in the loadout for that bank. They are only used on fighters/bombers (small craft). You can define them on capital ships, but the AI will not use them.

Root node for all gun banks. Use the New/Copy/Delete buttons to add or edit gun banks.

Each gun bank is a list of points (x/y/z) that define the firing points per gun bank. Use the New/Copy/Delete buttons to add or edit individual gun points.

Location (x/y/z) of the firing point

Normal vector (x/y/z) that defines the direction in which the primary gun is fired.

Each missile bank is a list of points (x/y/z) that define the firing points per missile bank. Use the New/Copy/Delete buttons to add or edit individual gun points.

Location (x/y/z) of the firing point

Normal vector (x/y/z) that defines the direction in which the missiles are fired.

From the POF file comments: The autocentering point was basically just a little convenient extra data we stuck in models where the pivot point of the model wasn't at the center. Since we rotate ships in the tech room by rotating around the pivot point, it looked dumb when the colossus' rear end was in the middle of the screen and it was spinning on it. So the autocenter point was just a point pretty much near the model we could use to push an extra matrix onto our transform stack and have it show up centered around it. The point itself is in model coordinates.

A list of arbitrary text fields (can have more than one). PCS2 auto-generates some logging information about the compilation process of that particular POF file. Feel free to add your own comments or credits here.

This article is a stub. You can help the FreeSpace Wiki by expanding it.
Retrieved from "https://wiki.hard-light.net/index.php?title=POFCS2Help/HelpHome&oldid=63648"
Categories: