From FreeSpace Wiki
(Redirected from Sanctus)
Jump to: navigation, search 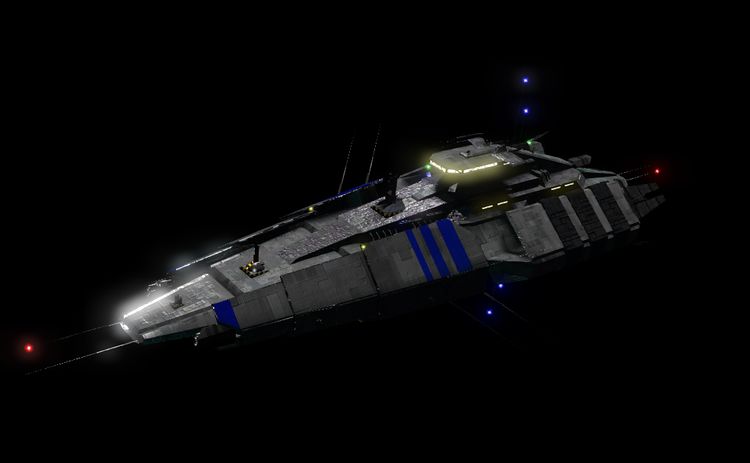 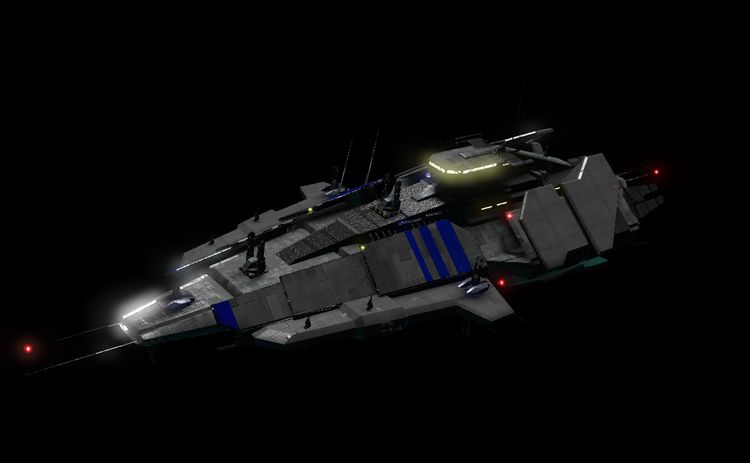 The Sanctus class cruiser is a ship with a troubled development history.

In the 2350's the future shape of the Federation space military was proposed in BULWARK's Strategic Imperative Paper, describing a garrison force operating inside a highly developed supply and intelligence infrastructure. Federation warships would be supply-hungry, but capable of ferocious high intensity combat to contain any invasion force. The requirements for the Future Fleet Cruiser were heavily influenced by this document, and a variety of imaginative doctrines were proposed by competing defense contractors.

The Sol element of Han-Ronald Corporation eventually won the contract to build the Sanctus, drawing upon its years of cruiser design experience to conceptualise a hybrid cruiser-freighter. Deploying a wing of Sanctus cruisers alongside a Solaris destroyer would relieve the logistical strain of deploying these behemoths in combat, while providing area defense and fire support for the destroyer's air wing. Strike capability was already filled by the Purusha frigate - cruisers were anticipated to be deployed as part of a battlegroup.

The Sanctus turned out to be an unhappy compromise. The ship was substantially larger than any previous cruiser in service, yet its weapons barely outstripped that of a Fenris. Cargo space was limited by the need to host the ship's own weapons and combat systems, and though critical spaces were sufficiently protected, the cargo hold had a desultory armour scheme that left it vulnerable to a determined attack. Due to ongoing trade route raids by Gaian Effort forces, the role of the cruiser was switched from the relatively supported fleet cruiser role to that of convoy escort, to which the Sanctus was poorly suited.

In the immediate aftermath of the Gaian Effort campaign, Admiral Calder began an extensive refit program to all Sanctus cruisers to replenish Third Fleet's strength. The cargo hold was removed and armour improved around vulnerable areas. Light torpedo launchers, new point defense and burst flak weaponry were added. The result was a tactically flexible weapons platform, powerful against strikecraft - if somewhat undergunned against larger warships. Throughout the course of the war with the GTVA, Earth and Mars would began a similar process of upgrading Sanctus cruisers and deploying them as attack cruisers. It was not until the second refit of the Sanctus where deficiencies in firepower and armour were finally addressed and the design would reach its full potential as a line combatant.

Sanctus is Latin for Holy. As an Ordinary of the Mass, it is a hymn that is sung as the final words of the Preface of the Eucharistic Prayer.

The Sanctus is the most numerous of the UEF's versatile and beautiful capital ships. To compensate for its lack of beam weapons and relatively light railgun armament, the Sanctus mounts a pair of four-tube torpedo launchers that a)look incredibly cool and b) allow it to serve as a close-range, formation-disrupting combatant. It may not have much punch, but it can force a GTVA gunline to turn off and deal with a new threat.

The Sanctus will get murdered at range by beam-armed combatants. Its antifighter defenses are, relatively speaking, numerous, and it is a veritable fortress except from the fore against bombs.

Treat it as you would a GTC Aeolus were you a GTVA pilot. The fighter screen is exceptional, and a welcome relief for a damaged fighter who needs escort. When hostile warheads are incoming however, you need to defend these over-sized cruisers. They do not have heavy armor, so they are vulnerable to fighter attacks especially swarm missiles. Unattended they tend to be the easiest pickings for GTB Artemis attacks in the UEF warship ranks. Do note however the 40 meter per second top speed, 160% of the speed of a GTCv Chimera. As far as damage output, it barely outstrips a Freespace 2 GTC Fenris. Much of the first War in Heaven campaign can be spent trying to rescue these things from the slaughter.
Retrieved from "https://wiki.hard-light.net/index.php?title=UEC_Sanctus&oldid=45587"
Categories: