Setting up a campaign file

In FreeSpace, campaigns are stored in text-based *.fc2 files. Setting up a campaign can be done in two ways: in FRED's Campaign Editor (SHIFT-C in retail, and in very old FreeSpace Open builds) or in a conventional text editor like Notepad.

This article will be about the Campaign Editor.

Before you start setting up your campaign, make sure that you have all the missions that you want to be in your campaign. Gradually adding new and new missions to a campaign file is not recommended for beginners.

If you plan to include new, non-retail ships in your campaign, make sure that they are in the table files already. Gradually attaching new and new user-made ships or weapons works on the same principle as adding new missions.

The Campaign Editor is accessed through the Editors tab, or (in retail) by pressing SHIFT-C in FRED.

Here is a list of what windows you see, and some explanations on what you can do with them:

This is a list of all the missions that are within your missions folder. You can take missions from this window and put them into the right-side window by highlighting the mission you want, holding CTRL and clicking on the part of the campaign tree you want the mission in. If the missions that you are looking for aren't in this window, make sure you have the appropriate mod selected in the Launcher and your missions are indeed in mymod/data/missions folder. If you put a mission into the right-side window, it will disappear from this list. If you remove a mission from the campaign's mission list, it will reappear in the Available Missions window.

These options are by default grayed out. You can edit these options if you click on a mission that you already inserted into the right-side window.

It's also by default grayed out until you select a mission from the right-side window.

You can define which mission will follow the selected mission and under what conditions. You can also set the conditions under which the player must restart the mission. Details will be given in the section that discusses the right-side window.

There's a gray area below your Branches section. It's the Developer Notes (set in the Mission Specs Editor) of the selected mission. Developer Notes are used by mission makers to remind themselves of things they are about to implement, improve upon, etc. 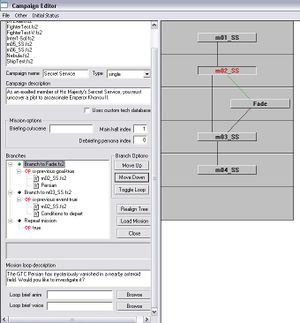 Loop missions are like the SOC ones in the Main FreeSpace 2 Campaign. The player can choose whether or not he wishes to complete some bonus missions or proceed with the main branch.

If the player presses Decline, he will proceed with the main campaign branch.

You can define which ships and weapons you want the player to have access to at the beginning of the campaign. If you test your campaign and have no weapons available, it is because you forgot about this feature.

This is not permanent, as you can easily make additional ships or weapons available using the allow-ship and allow-weapon SEXPs.

You can access an in-built error checker by either pressing ALT-H or clicking on Other --> Error Checker. This is a very basic error finder. It will help you pinpoint some technical errors that will prevent your campaign from loading up.

This window is the "heart" of the Campaign Editor. You can define which missions will follow which one and under what conditions. Ideally, you had already dragged some missions into this window, with mission 2 being below mission 1 and mission 3 below mission 2, etc.

Click on the uppermost mission. First, you must set which mission will follow it. Tap your left mouse button and drag it above the mission that you want to follow your selected mission. If you can see a line draw between the two missions, you've been successful. Now select the first mission again. Right-clicking on it will bring up the following options:

Note: For training missions, the conditions for advancing to the next mission must be set using goals and not events! The reason is that the Skip Training button marks all goals as complete and all events as failed. If the next-mission-condition is an event, it'll always end up false and thus the next mission will not be selected correctly. Well, technically I guess you could use events as long as if, when they're marked false, the player will advance to the next mission...

If you take a look at the Branches section (to the left), you will see that it now says: "Branch to xx" and, if you clicked on Add a Repeat Link, "Repeat mission." If you expand them, you will see that you can set up a SEXP tree there. This SEXP tree will tell under what conditions will the player be able to proceed in the campaign or forced to replay the mission. One of these trees must be set to true. This "true" link must also be the last in the list, otherwise your campaign won't run. In the example (look at the picture), the conditions to proceed in the campaign are set, and the repeat link is set to true. If you want to set the conditions under which the player is forced to replay the mission, your "Branch to xx" must be set to true. Neither method is superior to or more advisable than the other. It's a matter of preference. If there are two conflicting set of conditions, the one that is higher in the list will take place. (This is why the "true" tree must be last to eliminate the logical possibility that nothing would return a true value).

Editing in a text editor

You can edit your campaign file in a conventional text editor like Notepad or WordPad to apply some minor changes like changing the main hall indices. Only more experienced FREDders are advised to edit their campaigns in such a way. For more details, see Editing a mission in a text editor