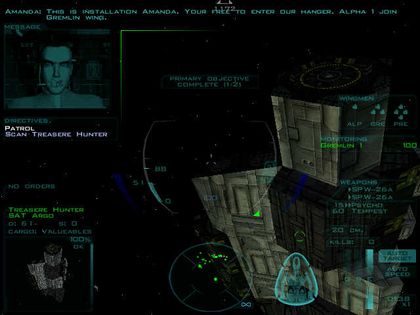 How many mistakes can you find?

Apart from providing an enjoyable gameplay experience, missions must also conform to certain grammatical standards. Missions that are teeming with spelling (and/or grammar) mistakes look unprofessional and distracts some players' attention from the "fun" part.

This article will give advice on how to spellcheck a mission without a human aid. This method does not always guarantee perfection; for that, a reliable human spellchecker is required.

Parts of the mission that are to be checked

This is a quick checklist of mission-coded items that are require to be checked. Some are obvious while others are for reminders.

Items like waypoints or Event names do not need to be spellchecked because those are only readable in FRED and not in-game. Waypoints and Event names are only for identification purposes.

Ship and wing names, including those of navigation buoys, also require spellchecking. If their names are English words, a dictionary will suffice (beware of spelling differences between variants of English). Incidents such as GTC Invencible can be eluded this way. Other names like those of mythological or historical figures can be checked online. Wikipedia is reliable in this respect.

Mission goals' names also appear to the player by pressing F4 and opening the Events tab in-mission. If a mission goal is completed or failed, the event tracker will display the goal's name, not the mission goal's text. Not many would notice spelling mistakes here and complain, but it is nevertheless advisable to check.

Microsoft Word is a reliable spellchecker, but it cannot fix everything. MW is a powerful tool for this task because it has a built-in dictionary. If a word does not have a dictionary entry, it will be underlined in red. By right-clicking on the underlined word, a small window will be able to give some words that are spelled similarly. In case of pure misspellings (galexy instead of galaxy), the right spelling will be almost always given.

Copy/pasting all briefings, messages, ship names, etc. is the first step in spellchecking with Microsoft Word. Check the words that are underlined in red, and see the recommendations. If you are unsure about a given spelling, look it up in a dictionary. Non-native speakers of English should beware of mixing British and American English. While neither honour or honor is a misspelling, using both spellings in the same window is conspicuous and may crop some criticism. Microsoft Word will be able to pinpoint alternate spellings and underline them. It's better to pay attention to consistency as some words have two alternate spellings even within the same variant of English (dialogue and dialog in American English). The two FreeSpace games were written in American English. American members of the community have never had a problem playing campaigns that are written in a different variety of English. However, pure misspellings (depo instead of depot) usually distract many players' attention.

Note that there are FreeSpace-related spellings like ship class names that are not in Word's dictionary. Sathanas is one such word. If you are sure that a given spelling is correct and it is underlined in red, add it to the dictionary so that next time it will not be underlined. This will also allow Word to pick a future "misspelling" of the same word. For example, you may know that the correct spelling is Rakshasa, yet it is possible that you make a typo and it spell it like Raksahsa. Note that plurals (or for verbs, past tenses) need to be added individually. Rakshasas will be underlined even if Rakshasa is in the dictionary.

There are also words (or sometimes entire phrases or sentences) that are underlined in green. That means that the sentence may contain a grammar mistake. Right-clicking on what is underlined will either give you some concrete recommendations or indicate why Word believes that something is wrong. MW's suggestion is not always the correct or most relevant one. Understanding why the underlined bit is problematic requires a certain degree of grammar knowledge. Misused adverbs, pronouns, or conjunctions are usually the case. The last sentence of the image (see above) would have originally read "Their low on ordinance however," so MW would have underlined "Their" with green, indicating that while the word is spelled correctly, it does not fit the context. "They're" would be given as a recommendation in this particular case. Be suspicious about every string that is underlined in green. Consulting a grammar reference will provide invaluable help if used correctly. If this is the first time you are revising your texts in such a way, you will think that such corrections are too strenuous and time-consuming to be worth it. The more effort you put into it now, the less you will have to worry about it in the future. There are common mistakes in every language that are frequently made, but once learned, they will not be made again (differentiating its from it's and your from you're are typical English examples). Correcting them and learning the correct way once will save you time in the future. FREDders who are making a campaign should keep this in mind.

Mission designers who are familiar with refining their missions in a conventional text editor—like Notepad or WordPad—are able to edit their mission messages, briefings, directives, etc. with a different method.

WordPad opens the entire mission in one window, so jumping from mission briefing to mission messages is fast with the Search option. It is also less risky, because FRED sometimes crashes while saving the mission, possibly breaking the mission itself. Some community members prefer spellchecking in WordPad rather than in FRED because of the better legibility in the former.

If you know that you misspelled a certain word, but don't know where to look for it, it is fastest to use WordPad's Substitute option (CTRL-H).

Inexperienced editors are advised to back up the target mission before opening it in WordPad. Although FRED creates a .bak backup file after every save, it is the second most recent version.

Here are some common misspellings that Word's spellchecker will not be able to detect, so common misspellings like mixing up your and you're do not belong here. This list is intended to be a quick reference for FREDders. Names of ship classes (GTCv Deimos) and individual ships (GTD Aquitaine) can be checked through FRED and the FreeSpace Wiki, respectively.

Return to base, pilot or Alpha 1, you may engage your subspace drives now

These are some words that a spellchecker would indicate as a misspelling, yet, as dictated by the convention set up by FreeSpace, are correct.