From FreeSpace Wiki
(Redirected from Syrk)
Jump to: navigation, search

We are the invaders.

Syrk: The Unification Wars was a pre-FS1 mod that was being developed for the FSO engine by the Syrk development team. Shortly after the release of the demo, which received mixed reviews, the project leader (Lucika) announced that Syrk ceased development on October 1, 2012. Their assets, including ShadowsOfLight's unqiue music tracks, were made available to the public (see below). 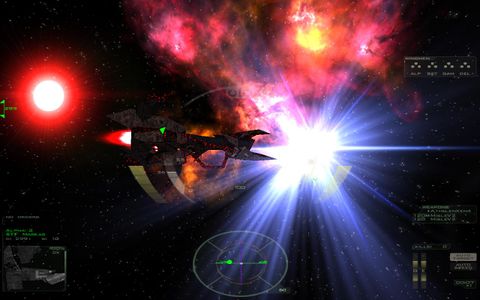 Author: Lucika, with help from the Syrk dev team.

Missions: A 3-mission-long demo was released.

Requirements: At least a mid-2011 nightly.

"Humanity has risen. Originated on the third planet of the Sol system and having greater dreams about their future, they’ve colonized Sol. But their fragile peace has shattered in no time, and a civil war started and the conflict’s outcome will surely determine humanity’s fate… Even though every single human is sure about this, none of them can expect that they’ll meet their nemesis on the other side of an unstable jump node…"

The campaign that shows you the bloody process that lead to the formation of the GTA is coming to a Sol near you! With 4 Terran factions fighting for control of humanity, starting a story that stretches much farther than any of you could ever imagine, Syrk: The Unification Wars will allow you to witness such milestones of human history as the siege of Pluto or the majestic arrival of the very first Orion ever made. To spice this all up, you will encounter the Destroyers as well!

Yes, our mortal enemies, the Shivans appear in a campaign that is set long before the Great War. Yet I can assure you, canon will not be contradicted! With 20(...40...60!) dogfightful missions we will be showcasing a yet uncovered part of Terran history, the events that started it all: the Unification Wars.

Shiv - Co-Founder and FREDder. Made it possible to host Syrk at GameWarden.