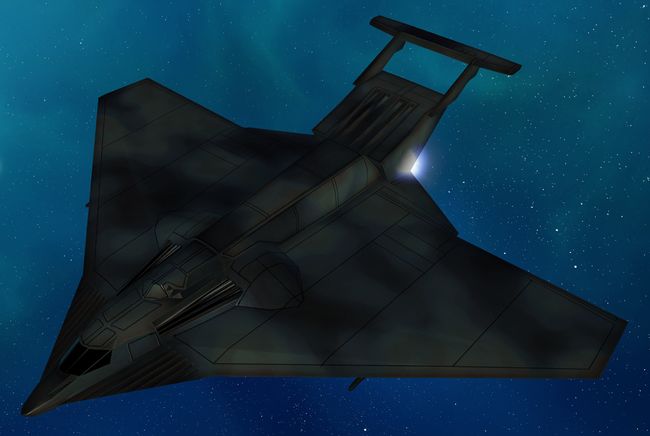 Introduced in 2717 as a first response fighter for planetary defense forces, the popular Trident was rendered obsolete by the development of the Cheetah, but found a new role among the SLDF army in fast ground attacks.

The Trident was built to provide a strong punch in a small, light frame, making it ideal for carrier duty.

Its 200-rated engine provides excellent power, and its frame can withstand the forces created when maneuvering at the high speeds that are the Trident's specialty.

Once equipped with two tons of standard armor plating, the Trident's armor was upgraded to StarGlo Ferro-Aluminum, primarily to provide better protection from anti-aircraft defenses.

The fighter's advanced O/P 3000 tracking system could almost fly the fighter by itself, leading to a joke among pilots that their only job was to pull the trigger.

Despite the fact the Ferro-Aluminum armor was a later addition, it was the Tridents main advantage over the Cheetah, as well as using systems that were easy to maintain. However, the ability to

produce Ferro-Aluminum and its ground-based cousin Ferro-Fibrous was lost in 2810 with the destruction of the last known foundry.

The last Trident would roll off the assembly lines in 2825, and as the Succession Wars dragged on more and more Tridents were forced to replace their Ferro-Aluminum with standard armor.

Though the loss in protection was technically minor, it became exaggerated such that the fighter lost its marketability.

Surviving Tridents are mostly found serving in backwater militias, independent states and Periphery realms, with the Outworlds Alliance fielding the largest number as trainers for its pilot cadets.

However, in 3069 rumors spread of Blakists fielding advanced Tridents when three vessels, lacking any cockpit assemblage, were seized in the Orestes system.