Get wise with bitwise!

If you have any sort of computer science background, the term bitwise should come second-nature to you. If you're not, then here's a quick rundown.

Computer programs don't store numbers as the numbers we know in base-10, they store them as bytes. What's a byte? A byte is a bunch of 1s and 0s bunched together. The single element (the 1 or 0) is just called a bit. The computer program looks at the bits in the byte and reconstructs the number we're looking for by using each bit's place value as a power of two.

Imagine we have a campaign going with 4 persistent ships.

How could we easily keep track if they are alive or dead? (Let's pretend that the health of each ship doesn't matter, just if they're alive or dead.) is-previous-event-false ShipAWasDestroyed? Sure, but if our campaign is going to be long, you're going to be checking a lot of previous events. Put its status in a variable? This is good, but updating 4 variables throughout a campaign? What a… pain.

Hey, look at that bitwise example above. If our variable's bits corresponded to the status of our ships, that could work. So 1 1 1 1 would be all four ships are alive. 1 0 1 0 would be 2 ships alive, 2 dead, 0 1 0 1 would be the other 2 ships alive and the other 2 dead. Let's see how we could accomplish this.

So when we store our ship's status, we want 1 1 1 1 since they are all alive. We would NOT just type in 1111, because in binary that is actually 0100 0101 0111. Not quite what we're looking for. Constructing the number in binary and be tricky for people unfamiliar with binary (FYI its 15). So maybe instead of making each bit "is this ship alive?" we could just think of each bit as "is this ship dead?" That way we can just keep our initial value at zero.

Now how do we modify our variable properly if a ship dies? This nifty set-bit sexp. Now the set-bit operator only returns the value of a variable after a specific bit is set. Set-bit by itself doesn't modify the variable, we still need to use the modify-variable sexp first. But it's still simple enough to use. 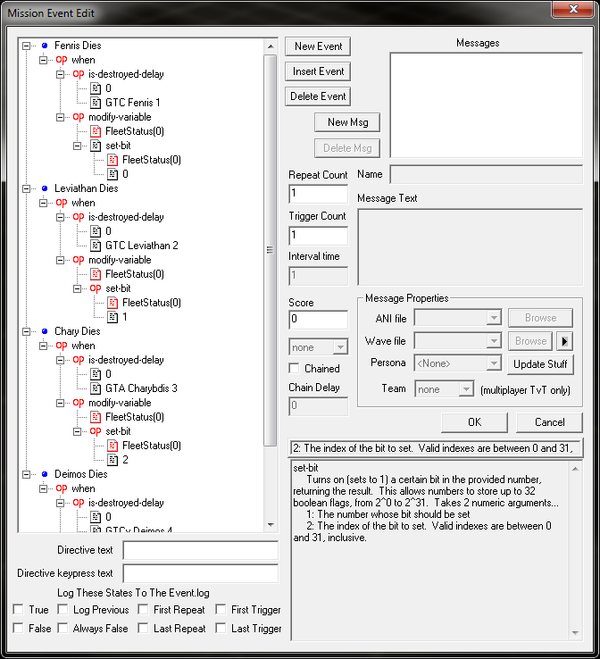 "Modify FleetStatus to be FleetStatus with Bit Index 0, 1, 2 or 3 set" (Quick note, computers love to start counting at 0, so index 0 is technically the first bit)

Then at the beginning of each mission (or the arrival cue) we just check a bit's status with is-bit-set to see if it should arrive. 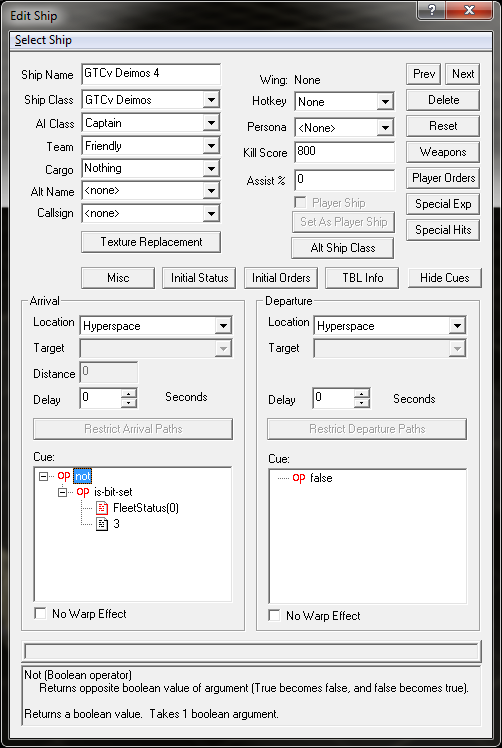 To get into some real advanced things, you can also play with bitwise AND, OR and XOR operators. Check out this wikipedia article for more great info on those.

If you need more than true or false, you could do similar things with string-get/set-substring. It works similar to the bitwise operators, it only affects a desired section of the variable. For instance you could store things like morale levels for a squad of fighters, a rough health status for turrets, or responses when a player was asked a question. Things can get pretty complicated though, so take things nice and slow.