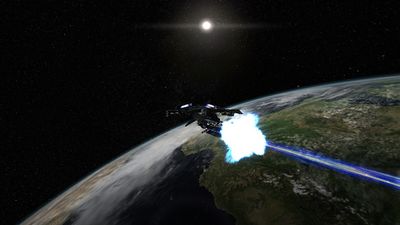 Pretty much a sniper against subsystems, this deals much more damage than the Scalpel, and may not have the single-shot power of a Paveway, but if you need to shoot the system at range and do it now, the Archer is perfectly acceptable. Call a support ship and reload before you need to de-fang. If you can't stand the shudder, you still get a high-accuracy shot in third-person mode.

What makes the Archer truly special compared to other anti-subsystem weapons is that it can shred subsystems/turrets very quickly...and maintain that pace for quite a while, limited only by its ammo--which is still quite a decent amount, and can be repleneshed by a support ship. Whilst most fighters would run out of Paveway missiles quickly--and have to wait quite a bit for the slow missiles to reach their targets--or quickly run out of energy when firing Maxims, the Archer can maintain fire without pause for a while, destroying turret after turret, subsystem after subsystem, and it costs virtually no energy to do so. The only tricky part about using it is that hitting smaller turrets from the Archer's maximum range can be a challenge, especially if the target ship is maneuvering or moving at all. It is still, however, much safer and more reliable than using Maxims or anti-subsystem missiles. Additionally, if the shudder is giving you trouble, then simply slow down your rate of fire a bit to allow for your view to stabilize before firing again.
Retrieved from "https://wiki.hard-light.net/index.php?title=Archer&oldid=61237"
Categories: