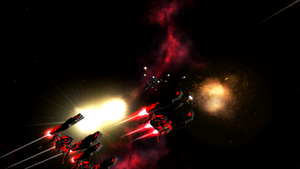 Flak is generally more effective against fighters and bombers than warships. However, flak guns are also effective against other smaller-sized ships such as transports, freighters, and even weaker cruisers. When a projectile of flak explodes, it has a small damage radius. Flak projectiles usually do more damage on hull plating than on shields. Flak guns are also known to be nearly useless against subsystems.