This article is about the species. For the campaigns by Blaise Russel, see Phantoms and Echo Gate.
The Destroyers redirects here. For a list of destroyer-class vessels, see Destroyer.

The Shivans are a sentient species who likely originated in an unexplored region of space. The first known entry of the Shivans into the known galaxy occurred 8,000 years before the events of FreeSpace, during which the Shivans exterminated a highly advanced civilization, known as the Ancients. The Terrans—or alternately, humans—and Vasudans explored subspace and colonized the known galaxy, without any traces of the previously fought Ancient-Shivan War. When the Terran-Vasudan War entered its fourteenth year, the Shivans attacked Riviera outpost in Ross 128, initiating the conflict known as the Great War. At terrible cost and a stroke of luck, the joint Terran-Vasudan forces repelled the Shivans, though this victory was temporary. 32 years later, in 2367, the Shivans returned and the Second Shivan Incursion broke out.

Although experiments were performed on live Shivan specimens, very little is known about this species. Their origins and motives remain completely unknown. However, there are many non-canon Shivan theories discussing the possibilities.

The Shivans serve as the primary antagonists of both FreeSpace games, as well as a fair majority of user-made campaigns.

An intelligence readout related to the Shivans.

Shivans have multiple eyes, some of which seem to have the function of compound eyes, not unlike some varieties of insects. Shivans also have five legs, and can run equally well over a floor or over a ceiling. It has been hypothesized that Shivans may have spent their evolutionary process in a zero-gravity environment. Each Shivan leg ends in a very strong claw, capable of crushing even the sturdiest of known alloys. Parts of their thorax seem to act as compartments, such as ones that might be found on a space suit. It has been suggested that what we have actually seen have been either robots or organic creatures in some sort of exo-skeleton. However, we have, at present, no reason to support either hypothesis.

Their insect-like carapace does not appear original to the creature's physiology, suggesting the Shivans are a cybernetic fusion of biology and technology. The integrated plasma weapon also exhibits properties of an organic-artificial fusion. The weapon may be a kind of focusing device powered by the energy of the being itself, though this point is the subject of heated controversy. These details are cited as evidence that the Shivans could not have evolved as the Terran or Vasudan species had, but that they were likely constructed by another entity. Only a handful of Shivans have ever been captured, and all research on live specimens ended with the Galactic Terran Intelligence's (GTI) Hades Rebellion in 2335. The results of these studies remain highly classified.

The first known conflict fought by the Shivans is the Ancient-Shivan War, 8,000 years ago. The Ancients were a proud, technologically developed race who built a vast empire. Though they were a belligerent warrior race, they were eventually outmatched by the technologically superior Shivans. The Shivans drove them back to their homeworld, bombarding it from orbit. The war ended with the extinction of the Ancients and the withdrawal of all Shivan forces from the known galaxy.

8,000 years later, in 2335, the Shivans resurfaced during the Terran-Vasudan War. The SD Lucifer came out of nowhere and annihilated Riviera station in Ross 128. Rumors started to surface among Terrans about a third sentient race, but nothing could be confirmed until the Shivans intervened a small Terran-Vasudan battle in Antares. In the following days, the Shivans inflicted heavy casualties for both Terran and Vasudan forces, encouraging a cease-fire between the two warring factions, combining their strength against the new adversary. The Great War has begun.

Emboldened by the new technologies that allowed the defenders to compete with Shivan superiority, Terran Command attempted a daring operation—to capture the SC Taranis, a Cain-class Shivan cruiser. The mission was successful, and the cruiser was towed to Tombaugh Station. Tragically for the Terrans, the Shivan counteroffensive was devastating. Tombaugh Station came under attack and annihilated by a massive Shivan force, led by the SD Lucifer. Fighters and bombers deployed to defend the station could not inflict measurable damage against the Lucifer. Analysis indicated that the Lucifer was imbued with a seemingly impenetrable shielding. The Lucifer made its way uninterrupted to Vasuda Prime, and bombarded it from orbit, rendering its surface uninhabitable. Then it set course towards Earth. Fortunately for the Terrans, Vasudan refugees uncovered some Ancient artifacts and decoded them, revealing that the SD Lucifer's shielding did not function in a subspace tunnel. The Lucifer was destroyed in the Sol-Delta Serpentis tunnel, minutes before it could enter the Solar System. In the following weeks, the remaining Shivan forces were wiped out from known space. The Terran-Vasudan alliance won the Great War.

Despite what information we've been able to obtain, Shivans still remain, on many levels, an enigma to both the Terrans and Vasudans. Their origin and their destination remain unknown. While many have offered up possible explanations as to why the Shivans seem focused on the destruction of all other sentient species, we still do not know why they seem bent on total xenocide.

According to Ancient artifacts, the Shivans seem to possess some kind of sensitivity to subspace disturbances. While it is unknown why the Shivans returned to now-GTVA space in 2335 and 2367, it may have been by chance, cycle, or by the detection of Terran-Vasudan subspace travel and/or conflict.

In the ending of Descent: FreeSpace, the protagonist speculates that the Shivans as a race are not necessarily evil, stating that "the Shivans are the great destroyers, but also the great preservers". Their role was to exterminate other species who advanced beyond their ordained place in the cosmic order. It is postulated had it not been for the Shivans' intervention 8000 years ago, the Ancients may have grown so powerful that the Terrans and Vasudans may not have been able to survive. In turn the protagonist realizes that the Terrans' expansion would have made them a threat to any other fledgling species. This theory is taken further by Admiral Bosch, who hypothesizes that many races came before even the Ancients themselves, who were each wiped out in their turn to allow a new generation to develop.

One theory, suggested by Admiral Petrarch in the end monologue of FreeSpace 2, is that the Shivans are a nomadic race cut off from home, much like the Terrans are from theirs since the end of the Great War. This theory goes on to speculate that the Shivans used the Capellan supernova to create some form of "bridge", allowing travel to another (their home) universe.

Xenobiologists know very little about Shivan society. A leading hypothesis is the hive mind theory, arguing that Shivan society is broken down in specialized functions driven by a collective intelligence. The most convincing evidence supporting this theory is the behavior of Shivan forces following the destruction of the SD Lucifer, the turning point of the Great War. Other experts caution against attributing insectoid properties to the Shivans, regardless of their appearance and behavior. Shivan communication seems to occur through quantum waves; Admiral Aken Bosch's ETAK project was successful in decoding their transmissions, but all data concerning that project has been classified at the highest level.

However, due to the capture of the specifications of the ETAK project, it is possible that the GTVA may try to communicate with the Shivans at some point in the future, or possibly create a device to monitor and/or disrupt their communications. Either of these possibilities may hold the key to surviving a future Shivan incursion, as from the last two major encounters, it is evident that the Shivans exponentially increase their power between campaigns against other beings. 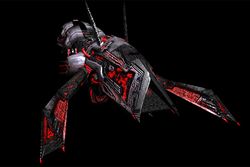 Shivan technology has proved baffling for both Terran and Vasudan scientists. Although their weapons and technology by necessity obey the same physical laws, the systems of Shivan craft seem to be fully integrated with the pilot's biology, making it difficult, but still possible, to use their spacecraft for espionage and spying. Only three documented successful missions have been carried out using retrofitted Shivan spacecraft to traverse Shivan territory under disguise.

Shivan technology also appears to be much more advanced than most Terran or Vasudan equivalents. Reverse-engineering captured Shivan technology has led to tremendous advances in shielding, beam weaponry, energy and other weapon systems. Shivan primary weapons are portrayed as inferior to their Terran and Vasudan counterparts, though this is arguably simply a matter of game balance. However, the true capability of the Shivan arsenal is demonstrated with their much deadlier beam cannons, which have faster firing rates than those of both the Terrans and Vasudans. Shivans also rely on their heavy shielding and use little armor plating on their fighters. The Shivans also have an inclination towards the color red; almost all Shivan vessels exhibit a red color scheme. Strangely, the Shivans seem to have adapted some Second Incursion-era Terran and Vasudan weapons, such as flak guns and anti-fighter beams, achieving technological parity for that period.