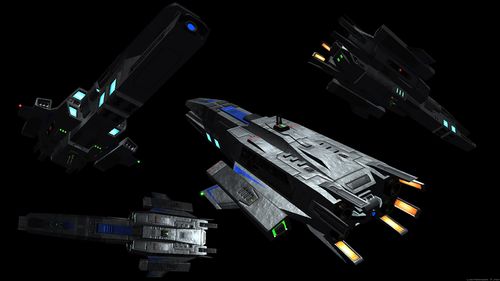 The Lightbringer is a late addition to the GTVA arsenal and the only bomber capable of mounting a specialized beam cannon for capital-ship assault. It was under development for years as engineers faced a lot of problems with the miniaturization and integration of the massive weapon. When the shivans arrived it still wasn't functional, but after a Vindhyachal bomber was captured and analyzed, the technical problems were solved and the ship pushed into service. Even so, the sheer power and cooling requirements of the beam cannon - dubbed Obliderator - necessitated a large chassis, making the Lightbringer second in size only to the Armageddon - a strategic bomber. Unlike the Armageddon, the Lightbringer isn't as ponderous or slow, but doesn't quite have it's ultra-thick armor or shielding. With 2 standard and 1 rear flail turret, it has good survivability.