Emblem of the Ubuntu Council of Elders 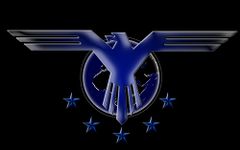 In the Blue Planet continuity, the United Earth Federation, or UEF, is the ruling power in Sol.

The United Earth Federation was formed from the ashes of the Galactic Terran Alliance after the Lucifer cataclysm destabilised the Sol-Delta Serpentis jump node. Earth leaders were quick to realise that a radical change in economic and political governance was needed in order for the system to survive without the resources of the colonies. The Sol system quickly became factionalised as order broke down and new territorial lines were drawn up. Earth and Luna underwent a state of emergency while their leaders sought to defuse the crisis.

Some order was restored when the socialist and humanist Global Ubuntu Party was brought into office after winning over most of the ruling elite and Earth's population with the promise to build up Earth's stricken economy and ensure enough resources remain available for everyone. Careful economic regulation was introduced in order to maximise the efficiency of Earth's already formidable economic infrastructure. Military spending was slashed, and a planet- and system-wide effort at job creation and civil construction began. Eventually Earth's economy settled and gained strength.

Sol's military shrunk from a galactic war machine to an intrasystem peacekeeping force. The Orions were scrapped and old GTA cruisers were retired in favour of quick, versatile strikecraft and small carrier vessels. Conflict within the system was limited to small skirmishes, but was common enough to ensure that the military was always needed. As the economy improved, so did the military. Eventually Earth became the regional economic and military powerhouse, and formed an alliance with Luna, Mars and Venus. In recognition of Earth as the hub of the system, the alliance was named the United Earth Federation. Over time, the Federation grew to include the Jovian and Saturnian systems.

The Federation maintained civilian governments in each of its member states, but long-term policy was steered by a group of non-elected religious and spiritual leaders known as the Council of Elders. The Federation completely removed the centralized power structure of the GTA, granting independent status to Earth, Mars and Jupiter and allowing each to maintain an independent governing structure and their respective fleets.