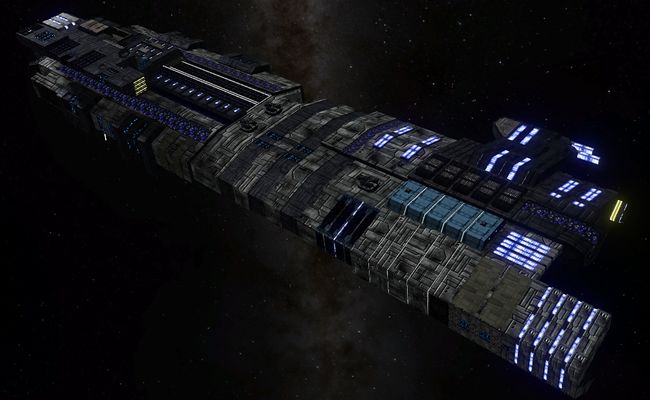 After the Second Great War military theorists and practicians came to the common conclusion that when undertaking the necessary development and improvements to the Alliance navy, it should not be forgotten that our greatest advantage over the Shivans during the war in Capella, Gamma Draconis and the Nebula were fighters and bombers that considerably exceeded the Shivans own with tactics and pilot skill. For this reason, they saw the need to create a new capital ship class that would carry large amounts of fighters and bombers, but as a departure from the standard destroyer design, they would operate far away from the field of battle. The first attempt to put a similar concept into effect was GTD Hecate. Its direct successor, constructed and accepted into regular service 10 years after the Second Great War, was GTCa Magnus.

The Magnus specialises in two tasks. Its primary task is providing fighter and bomber support for allied units throughout an entire system. In addition, if necessary the Magnus is able to take part directly in battle. It is equipped with unusually light armour for its size but it is still strong enough to endure enemy cruiser or bomber strikes. Its primary weapons are long range tactical plasma cannons and Geodess missile launchers, so it can provide support to the destroyers from safe distance, and a powerful jump drive enables it to withdraw from battle in case of trouble.

Magnus carriers as well as their Vasudan equivalents, the GVCa Neferka are the only capital ships in the GTVA navy that are capable of carrying the ultra heavy tactical bombers, the GTTB Euryale and GVTB Anedjib. They are expensive units, so they serve only in systems of strategic significance and no more than 2 per fleet. The fighterbay capacity of these giants stands at 280 fighters and bombers (including 12 Euryales).

The Wolf?s Fleet has 2 Magnus-class carriers, the GTCa Severian of the 9th Battlegroup and the GTCa Rhiannon of the 3rd Battlegroup.

What looks like a giant mess of tiles and lights is actually much more potent warship then it's light counterpart, the GTCa Farael. Magnus is armed with multiple, long range weapons. Although it's primary function is being typical big-momma carrier and deploy lots of strikecraft from behind the frontline, Magnus is capable of defending itself with lots of turrets and provide significant artillery fire from safe distance. This function is rarely presented in Shadow Genesis, but from two terran carriers the mod introduce, the Magnus is certainly the better one.