From FreeSpace Wiki
(Redirected from GTI)
Jump to: navigation, search 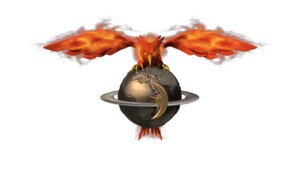 The GTI logo by Galemp/MjnMixael

Galactic Terran Intelligence (GTI) was the vast intelligence gathering arm of the Galactic Terran Alliance (GTA), responsible for many of the strategies and technologies developed in the Great War. GTI did much of the GTA's research and development and was behind several new designs, in addition to its namesake intelligence function. Its stated primary objective was "to provide Terran Command with accurate and comprehensive information regarding the tactics, technologies, activities, and strategic objectives of our enemies, specifically the Shivans and the Vasudan insurgency, Hammer of Light."

GTI appears to have grown well beyond the GTA's control by the end of the Great War, and was probably in this position well before then. At the end of the Great War, following the SD Lucifer's destruction, the GTI rebelled against the GTA. Their ultimate goals are not clear, for they never had the chance to carry them out. However, the GTA believed they intended to overthrow the GTA and dissolve the Terran-Vasudan alliance.

Not all members of GTI were in on the plot; among those left in the dark was GTI's own special-operations branch, based on the GTD Krios. Pilots from the Krios acquired information about rogue activity in the GTI before the rebellion could be officially declared, and GTI attempted to eliminate this information before it could be used against them. They destroyed the Krios but failed to kill all the pilots involved or all the escape pods that the Krios launched.

The surviving pilots of the Krios joined the GTD Soyakaze and led the effort to uncover what GTI was trying to do, eventually encountering the Hades super-destroyer, a GTI super weapon equal to the SD Lucifer in both firepower and armor. In a remarkable display of exceptionally superb GTA piloting skill and exceptionally idiotic GTI strategy, the Hades was destroyed before it was ever deployed in an offensive role. The destruction of the Hades effectively ended the GTI rebellion.

GTI is known to have operated a number of Orion-class destroyers.

The GTD Soyakaze may or may not have been a GTI destroyer. In any case, by the end of the campaign it was allied with the GTA.