The GTD Orion was a standard Terran destroyer mainly used during the Terran-Vasudan War, and later in the Great War. Because of the massive size of this ship, it incited fear into civilians, and therefore the Galactic Terran Alliance (GTA) did not send its Orion destroyers outside war zones. It was said that "Where these ships wander, war is certain to follow." (FreeSpace Reference Bible)

After the development of beam weapons and the ushering-in of the Deimos-class corvette and Hecate-class destroyer into service, the Galactic Terran-Vasudan Alliance (GTVA) began to gradually replace all remaining Orion-class destroyers in service with these new ships.

During the NTF Rebellion, a number of Orion-class destroyers defected to the Neo-Terran Front. Many of these ships were ultimately destroyed.

The Orion is the capital ship of the GTA. Measuring a frightening 2.1 kilometers in length, the cost to build one of these far outweighs the cost of paying the crew of this ship for 3 years. There is no more important symbol of Terran Pride than a ship like the Galatea or the Intrepid cruising past a colonized planet, patrolling the system and ensuring safety. In the course of the 14 year war, very few of these have ever been lost, making the destruction of an Orion a truly horrible defeat.

For over 30 years, the GTD Orion class was the largest ship in the Terran-Vasudan armada. Over two kilometers in length, bristling with dozens of death-dealing turrets, the Orion is as awesome in repose as it is in battle. All GTVA Orions have been retrofitted with the latest anti-warship beam weapons, as well as flak and AAA turrets for dealing with fighters and bombers. The Orion's cavernous hangar bays easily accommodate more than two dozen fighter or bomber wings.

See also: GTD Orion-class destroyers
Note: The Orions that have actually appeared in-mission are bolded. At least one of the FreeSpace 1 ships may not be an Orion, but some other class of GTA destroyer. However, all of the NTF Orions have either appeared in-game or have been shown in a Command Briefing to be an Orion-class, with the exception of the Jacobus and Normandy.

In Greek mythology, Orion was a notorious hunter. There are numerous stories about his life. 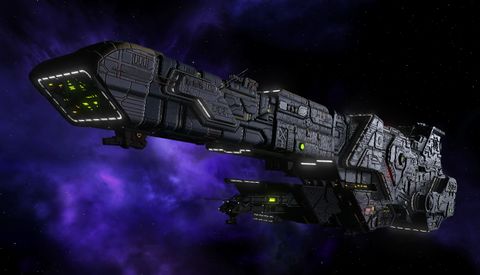 History
Model and textures by: Bobboau, StratComm
Conversion by: GalEmp

Despite the introduction of the new Hecate class of destroyers, the aging Orion still remains a vital part of the GTVA arsenal. With the Hecate designed with an emphasis on protection from fighter and bomber attacks, the Orion remains the king of capital ship combat - With heavy beam emplacements capable of laying down devastating fire in nearly all directions, it is a true terror to any capital ship that strays into its firing range.

However, its age does show in one area. Being designed in an era where fighter and bomber ordnance was far inferior to today's weaponry and where shields were nonexistent, it carries very few dedicated anti-fighter turrets, making it an easy target for bomber wings should it ever be left without fighter escort.

The Orion only carries eight squadrons of fighters to the Hecate's twelve, but has massively more firepower, arranged better on its hull. The GTD Bastion, however, canonically lists ten squadrons, it must be assumed that these are not full squadrons (twelve fighters per full squadron) or that the Bastion is not a typical Orion.

Great at eliminating capital ships. Those 6 anti-warship beams are nothing to laugh at. Rather vulnerable to enemy fighter craft but not as badly as people give it credit for. However, if you needed proof all warships over cruiser size need flak cannons, this would be it. The laser turrets cover long-range bomb destruction fairly well, but without flak, bombers could simply go closer and then let loose

It is worth noting that not all the canonical Orions in FreeSpace 2 mount standard weaponry, at least one (the NTD Uhuru) mounts Flak Guns on its upper turrets. This may have happened due to balancing issues, anyway.

If you're looking for a true descendant of HMS Dreadnaught in FS, put the Orion at the top of the list. Under ideal conditions it can bring two BGreens and two TerSlash to bear on a target; the heaviest broadside any GTVA destroyer can muster. Be aware that in practice presenting this broadside to another destroyer is quite dangerous; the side of the ship without a fighterbay has no non-heavy-beam turrets, and the other side has only a single blob. AAAf's and sufficent blobs to intercept multiple inbound bombs are mounted only on the upper and lower surfaces of the hull, so attack from or protect the sides of the ship.

One thing worth noting is that the tech description is a bald-faced lie: the Orion does not have "dozens" of turrets. The fact is that it has a dozen and one third turrets. While this lack of turrets does not compromise its ability against capital ships, the same cannot be said against a fighter assault.

In FreeSpace 2, the Orion is basically a capital ship killer. Its three heavy beam cannons (as well as several slasher beams for fire support) provide an excellent perimeter of defense for the ship. However, I believe it is still outmatched by the Hatshepsut in two ways; one, the Hatshepsut can focus more firepower, making it a worthy opponent even for the deadly SD Ravana; two, the Hatshepsut has 35% more hitpoints. Though the Orion outranks the Hecate in anti-capital firepower, it packs a tragically poor anti-bomber armament; a single dedicated heavy bomber pilot can take out the Orion. Though it has less anti-bomber firepower than the Hecate, it more than compensates for its lethargic heavy beam weaponry.
Retrieved from "https://wiki.hard-light.net/index.php?title=GTD_Orion&oldid=59405"
Category: