From FreeSpace Wiki
(Redirected from Gefs)
Jump to: navigation, search

The hostilities between the Gaian Effort and the United Earth Federation (whom the Gefs refer to derogatorily as the "Buntu", referring to the Ubuntu Party) are believed to stem not only from this ideology, but also due to resentment fueled by the socioeconomic disparity between the Effort and Federation citizens. It is not believed that all elements of the Gaian Effort share these beliefs, and in fact, the Effort's various factions appear to have diverged wildly in terms of their political goals and relationship with both each other and the United Earth Federation.

The power vacuum in the anarchic Kuiper Belt and Oort Cloud settlements, and the increasing need for supplies, maintenance and protection was filled by the militaristic followers of the Reverend Iain McDuff, known as the Gaian Effort. The Gaian Effort subsequently constructed numerous deep-space habitats, utilizing hollowed-out cometary biospheres alongside standard space construction techniques. The Fringe Alliance soon splintered off into numerous individual tribal groups, but the Gaian Effort continued to maintain military, industrial, and political influence in the Kuiper Belt and Oort Cloud.

The Gaian Effort's support of these fringe settlements earned them the loyalty and support of much of the local populace. Even after the Fringe Alliance's disintegration following the Ubuntu Party's rise to prominence in Sol, many people continued to support the Gaian Effort. Additionally, the movement's radical environmental ideology appealed to a segment of the population who had become disaffected with what was seen as widespread disregard for the natural environments of the planets in Sol. The failure of a desalinization plant on Europa, causing massive die-offs of the moon's native species, vindicated these beliefs. 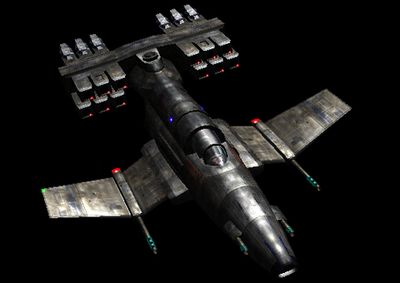 The Scimitar fighter, the main combat craft of the Kostadin Cell.

In 2386, GTVA Special Operations Command, believing that Kostadin Cell was playing both sides by attacking a Vasudan logistics convoy, began a campaign to systematically eliminate their assets and high-ranking personnel. The success of this campaign prompted Rev. MacDuff to begin Kostadin Cell's final mission -- a plan to ram the cell's asteroid habitat into Earth, destroying its ecosystem and forcing a planetwide evacuation so that humanity would become Cometary Man. This contingency was foiled by Noemi Laporte, Rev. MacDuff being killed in the process.

With the death of their leadership and the destruction of the vast majority of their outposts, Kostadin Cell has effectively ceased to exist.

Known individuals of the cell included the following: 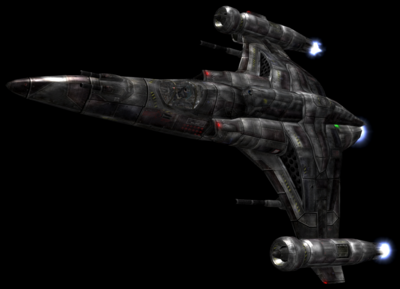 The Claymore fighter, the main combat craft of the Greenfly Cell.

Greenfly Cell is a moderate Gaian Effort cell committed to the pursuit of a transhuman agenda, presumably to adapt the human phenotype for life on a cometary body; at least one of these experiments has produced a neural structure compatible with Nagari Process communication. As of 2386, they have peaceful, if neutral, relations with the Federation, and the Council of Elders in turn have not pursued attacks against them, believing that their work could lead to an alternative survival strategy for humanity. They are rumored to have had covert contact with the Fedayeen, and may have even taken custody of the former Kostadin Cell's main asteroid habitat and its inhabitants, but this is unproven.

Known individuals of Greenfly Cell include the following:

Known assets of Greenfly Cell include the following:

Greenleaf Cell is a Gaian Effort cell known to be hostile to the Federation as of 2386; they have committed attacks against the UEF, but not to the extent that Kostadin Cell did. Despite the similarities in names, they have no affiliation with Greenfly Cell.

Bloody March Cell is a Gaian Effort cell known to be hostile to the Federation as of 2386; they have committed attacks against the UEF, but not to the extent that Kostadin Cell did.