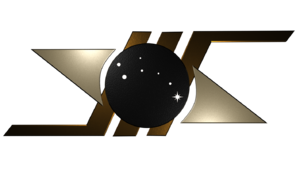 The NTR logo by MjnMixael

The Neo-Terran Remnant (NTR) is a terrorist/pirate group that operates in former Neo-Terran Front systems and is made up of the remnants of that organization not adequately mopped up after the events of the rebellion. They operate under a similar ideology to the old Neo-Terran Front (anti-Vasudanism, establishment of Polaris as a new Terran capital) but have lost much of the influence and military might of their parent organization. Lacking both manpower and military might, they often carry out terrorist attacks against civilian populations, financed by piracy.

It appears that Scroll of Atankharzim, Twisted Infinities, and FRED Academy all independently came up with the idea of the NTR. Either that or there was some cross-pollination of ideas among Sesquipedalian, Black Wolf, and Karajorma. In Scroll, Sesquipedalian renamed the organization to Neo-Terran Brotherhood during development.

The NTR logo was drawn by MjnMixael based on internal discussion in Scroll. The logo is similar to the NTF logo, but substitutes the Little Dipper constellation for Earth, with a particular focus on the North Star. Just as the NTF looked toward Earth, the NTR looks toward Polaris.