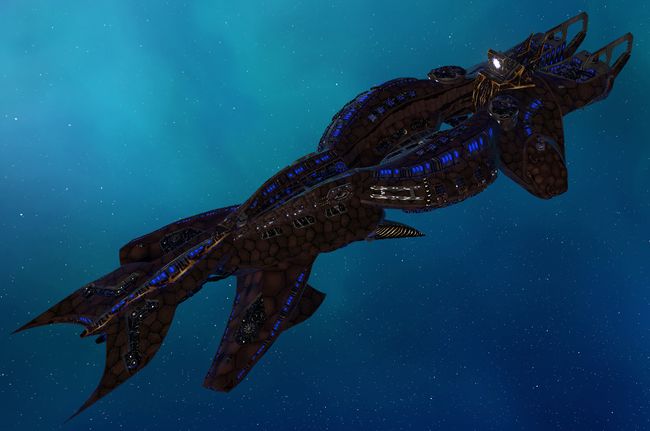 In the early stages of Vasudan space exploration thread of encountering potentially spacefaring race with hostile intentions was taken less than seriously. Only local peacekeeping forces were necessary at this time. Little is known to GTA about that era, but according to the intel provided by PVN officers after the armistice, Ramses tactical carrier was the first response to this thread and also a main logistic support ship needed in newly discovered systems. A destroyer concept was introduced in PVN after discovery of the 4th Vasudan system known to us as Altair. Empire required a unit that would combine roles of a space command center and mobile base for large complements of Anubis and Nefertum fighters able to reach newly established colonies scattered throughout planetary systems. Saviour-class light destroyer was designed to fulfil all these requirements. Faster than most lately designed destroyers and more lightly armored, its firepower and expected survivability are similar to Halcyon class next-gen frigates introduced recently to GTA arsenal.

Despite being a 2-km long battleship, the Saviour was no match for Terran Zagreus and Orion destroyer classes, primarily because its lightly armored and exposed reactors, designed to radiate the heat directly into space. This weakness was widely exploited by Terran bombers and bigger vessels early in the war, reducing total count of Saviour-class destroyers to 7 and forcing PVE to rely mostly on their Ramses carriers as their rapid fighter deployments. Later variants of the Saviour were basically classified as a new class - PVD Atum – which featured additional mid-section to cover still vulnerable reactors and more dense plating. Roles of tactical command and carrier were assigned to newer Typhon destroyers - a later descendant of the Atum class, utilizing main lines and internal structure, but eliminating majority of Atum weaknesses.

Very few of Atum class destroyers still reinforce Vasudan Navy as most of them were destroyed or replaced by Typhon class. Remaining Atums were equipped with a single spinal heavy plasma cannon and three frigate-grade additional cannons in crown configuration, making the Atum potent offensive tool and siege platform. Despite being classified as B-grade thread, firepower of Atum should never be underestimated. The destroyer is capable of performing deadly frontal jump-ins using the tactics similar to Shivan shock-jumps and bombard the target with all its four cannons. It also fully shows its potential in long and exhausting ship-to-ship duels. Cavernous hangarbays with two independent entrances are its second most important advantage. According to our intel, four vessels of this class remains in PVN service, The most notable examples are PVD Diligence of the Altair fleet and PVD Ascension from Epsilon Pegasi.

An older destroyer and heavy carrier of the PVN, the Atum is the precursor of the efficient Typhon-class. With the advent of Typhons, the Vasudans began to progressively relegate the majority of their older Atum-class destroyers to the roles of second-line warship and carrier support. The near total devastation of Vasuda Prime's surface and the last efforts to push back the Shivans have pushed a number of Atums back into active service. Some of their armaments and crews are unfit for combat, but PVN Command keeps deploying these ships now that the Shivan force’s strategic capability seems compromised following the destruction of the Lucifer.

Consider it as the first zod ship they ever classified as destroyer. An older brother of Typhon. Atum is smaller than Orion and Typhon, has two hangarbays and 19 turrets. Main cannons are placed to warp out and attack in crown configuration, but it also can be used as potent shockjumper and frontline enfroncer.