Series Resurrecta, Latin for Resurrected Series and colloquially shortened to SerRes or SR, is a FreeSpace mod set during the Reconstruction Era. The name is derived by the fact that its various minicampaigns, two of which have been released so far, all derive from a number of satellite projects to Inferno: Alliance Standalone which entered a limbo phase between 2008 and 2010. The project is aimed at resurrecting these campaigns and get them into playable status, compatible with modern standards.

During the development phase of Inferno: Alliance Standalone in 2006-2010, project leader Woomeister encouraged and supported the creation of unofficial minicampaigns as a way to effectively expand the modpack of said mod. Team member and FREDder Mobius started working on a number of independent minicampaigns, which ultimately entered a limbo phase. In mid 2020, many of these campaigns have been recovered from an old storage and, thanks to the contribution of a newly formed team mainly consisting of FSCRP and Inferno team members such as Admiral Nelson, Nightmare and Nyctaeus, the author managed to get two of these campaigns into working status, with other entering a to do list that will hopefully result in future releases.


Progress on the first release of SerRes, Shadows of the Great War or SotGW, kept a low profile for months. The process of getting the old INFASA to work on a FSPort modpack started in mid June 2020; content from the campaigns was however occasionally shown to the public, such as a now-famous screenshot that won HLP's June Screencap Contest and later became the preload background of the mod. On October 7th, 2020, an official Series Resurrecta board was launched on Hard-Light Productions, about nine days prior to the official release. It's worth noting that the release of SerRes is also the first occurrence of a released FreeSpace campaign created by an Italian FREDder and modder, as no other fans of said nationality have managed to deliver campaigns prior to that occurrence. 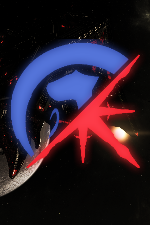 SerRes' current logo, created by Nyctaeus, combines the silhouette of the Hammer of Light emblem, as well as the Arachnas installation, both of extreme importance in the first release of the project. The logo is meant to be dynamic, and will evolve as future releases come out, each time adding a new graphical element related to released content.

The project maintains an active profile on ModDB, where content such as news articles and screenshots are posted regularly. During 2020's Mod of the Year Awards, the mod performed well in the contest. The founder of the website, Scott Reismanis, has confirmed that Series Resurrecta ended up being, among other things, the most voted mod in the Futuristic Simulation / Sci-Fi released in 2020 category, based on the contest's categories, rules and voting algorithms.

Shadows of the Great War

The first release of SerRes occurred on October 16th, 2020, under the brand name Shadows of the Great War [SotGW]. The release features the standard modpack that will serve as root for future upgrades, as well as two campaigns, Gehenna's Gate [GehG] and The Spirit of Ptah [TSoP].

Due to its nature of a collection featuring multiple campaigns, all SR releases should be treated as independent stories which don't necessarily contradict each other, but shouldn't be considered part of a single and new continuity within the FreeSpace Universe.

SerRes' modpack is based on the FreeSpace Port, as well as on Inferno: Alliance Standalone, and features extra spacecraft and ships belonging to the various combatant species. Stats and styles resemble those of FreeSpace 1, except for anti-warship armaments, which are a derivation of those used in INFA. Each species relies on its own set of anti-warship armaments: Terrans (railguns), Vasudans (neutron cannons) and Shivans (plasma cannons). Depending on the circumstance, certain warships are equipped with more advanced weaponry.

Common traits to SerRes campaigns involve introduction cutscenes at the beginning of each mission, and the fact that the player character doesn't get to start any campaign as Alpha 1. Instead, wingmen designations will vary throughout the campaign, even on a mission-by-mission basis, and orders that can be issued by the player to other wings will gradually increase in number, too. Alpha wing designation is reached at the very end, and is normally linked to more privileges to orders which can be assigned to other wings.

Each SerRes mission is preceded by a fan fiction story or transcript, that adds extra lore not only to each SR campaign, but also tries to answer some of the big questions concerning the FreeSpace Universe. Some of the fictions seem completely unrelated to the missions they're linked to, but serve a specific purpose that is somehow implied later on in the campaign.

Many details on SerRes ships, squadrons and characters are available on the FreeSpace Wiki:

All released and planned SerRes campaigns come with specific tributes to key authors in Literature and Art. All missions are preceded by a loading screen citing an artwork from past times, and the campaigns themselves feature various references to the mentioned artists. This tradition is expected to be carried over to future releases of SerRes as well.