Stars and Planets (Wings of Dawn) 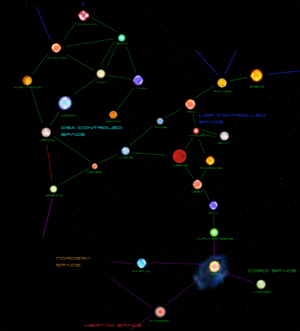 A map of known Starlances.

Stars and planets of the Wings of Dawn universe.

Lyrae was the first system to be taken by the CSA in the Terran-Cyrva war. In that period of time the people of Lyrae prime learned the art of spying and intelligence gathering. A skill they expanded upon after the war. The LSF Intelligence branch is famous for its many Lyraeian members. Most of the Lyrae heavy industry is located on it's moon along with its shipyards.

The 4th fleet was pretty much completely decimated in the Terran-Cyrva war and was rebuild afterwards with a focus on stealth and speed. Its size at the end of year 144 numbered 521 capital ships and 2431 strikecraft

Tauri prime was the first planet to be colonized and terraformed outside the Sol system and its population now numbers in the billions. Tauri II and III both have a smaller population but are mineral rich planets and provide vital resources for the LSF. The people of Tauri are generally known to be calm people who take their time with decisions.

The 3rd fleet has by far the highest ratio of capital ships and the large majority of its ships are being produced at the Io shipyards in Sol. Its size at the end of year NC0144 numbered 970 capital ships and 1456 strikecraft

Polaris I is a planet that is described by many as a 'huge resource sink'. Reason for this is that the only planet in the Polaris system was a barren rock, not much larger then Pluto. Terraforming has been a costly and lengthy process that was only finished twenty years later. The planet only has a small population of ten million civilians and is mostly used as an military outpost. Both moons have been equipped with powerful surface to orbit cannons for the defense of the planet.

Polaris does not have a fleet of its own but the 1st fleet of Sol is usually present in the system.

The only thing worthy of notice is the military outpost on the third moon and the small shipyard in orbit of it. The gas giant holds some valuable gasses and has been flagged for future mining operations.

Grens does not have a fleet of its own but the 1st fleet of Sol is usually present in the system. 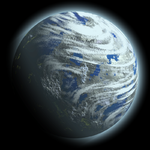 The Silva system is commonly known as 'Researcher paradise'. 80% of all research on space craft, weaponry and warfare is conducted here. The biggest population resides on Silva II while Silva I is mostly a testing site for new equipment. Silva holds extensive shipyards in both orbit and on the surface but as a general rule are only used to produce cutting edge technology and not to mass produce low end ships.

The 5th fleet is small but always equipped with the best and latest technology. A lot of its fighter pilots are from Harcon. The size of the 5th fleet at the end of year 144 numbered 361 capital ships and 773 strikecraft

The Phoenicis system has four large planets, each of them incredible poor in term of minerals and resources however they are each ideal for human life and required only a small amount of terraforming. They soon became a popular living location for people that wanted to get out of the crowded and busy Sol system. Drawn by the large open grass plains of the Phoenicis planets.

The 6th fleet never has a shortage of military personnel but has little in the means of production capabilities. 90% of its ships were made in Sol, Harcon and Silva. The size of the 6th fleet at the end of year 144 numbered 1146 capital ships and 3213 strikecraft

The colonization of the Vega system was delayed due to the Terran-Cyrva war but benefitted greatly from the new technologies developed during that war. The Vega system is famous for its 'blue space' caused by a large but thin blue nebula surrounding the whole system.

Librae's sun is by far the largest sun known to exist in this region of space and produces so much heat that only Librae IV, which is 145 AU away from the sun, is not a barren oven. Librae IV is incredible mineral rich and the people of Librae pride themselves on being able to produce all their ships themselves. They are also known for having a tanned skin and for being highly heat resistant.

When the Vega colonies were established the 8th fleet donated a large amount of ships and personnel for the new 7th fleet. The size of the 8th fleet at the end of year 144 was still impressive for a single colony system, numbering 1211 capital ships and 4110 strikecraft

Ravi drew a lot of colonists because of it being a binary star system. Creating myths and rumors of healing properties. It also received a lot of attention for its unique wildlife, creatures almost the size of dinosaurs on both Ravi I and Ravi III. Ravi II on the other hand would require so much terraforming that the LTW feared an other Polaris debacle and decided to leave the planet in its natural state for the time being.

The 10th fleet is but a small fleet, at the end of year NC0144 it only numbered 127 capital ships and 531 strikecraft. The Ravi government has plans to expand the fleet by an other 100 capital ships by the end of 147

Quickly after the discovery of the Ravi system, a starlance to Alpha draconis was discovered. What made the discovery so unique was the presence of Draconis prime, a planet that resembled the Earth climate in such a way that no terraforming of the planet was required for it to sustain Terran life.

The local garrison of the Alpha Draconis system consists mostly of small elements from various fleets that are tasked with exploration and starlance searching in the system.

The Sol system is the home of the Terrans and has by far the largest industrial base of any LSF controlled system. Most noticeable is the giant shipyard in Io's orbit, where over a hundred ships in a week can be produced. Mercury, Venus and Mars have been terraformed and colonized along with most major moons of the gas giants. The Sol system is the home of over 16 billion people

By far the largest fleet with over 4138 capital ships and 9000+ strike craft, the 1st fleet holds the reputation of being a mobile wall. Establishing a line at a moment notice and holding it with a firm resolve.

Harcon prime, despite extensive terraforming efforts, is a rainy planet with a heavy gravity. It is home to three billion Terrans. People from Harcon prime are generally stereotyped as being tough, good military personnel and xenophobic. This reputation was established during the Terran-Cyrva war where the military units from Harcon put up an incredible bloody resistance against the Cyrva, even going so far as to use kamikaze tactics on CSA capships. After the war Harcon prime remained closed for Cyrvan visitors up till NC0136.

Harcon III is a small planet (or a really large moon) in orbit around the Zerza gas giant and managed to stay clear of any of the fighting during the T-C war. Harcon III is home to many mercenaries, who made a smart fortune during the UEU rebellion and the T-C war but with recent peace are forced to find other occupations.

The 2nd fleet is known for its bravery, relentlessness in attacking and high casualty rate. The second largest fleet in the LSF with 3417 capital ships and 6123 strike craft, most of these are heavy fighters and bombers.