Difference between revisions of "GTD Erebus" 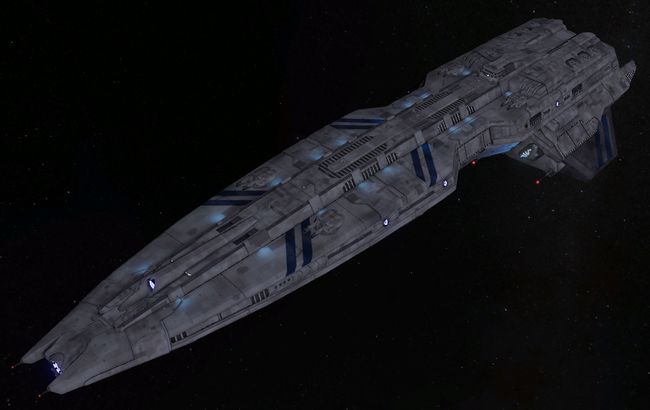 The Erebus-class destroyer. Humanity's sharpest sword. Primary force concentration asset in the Threat Exigency Initiative's doctrine of effect warfare. A triumph of achievement in the face of adversity: both economic and existential.

The mission of the Erebus is to enter a tactical situation and successfully resolve it. No matter the threat, the Erebus is designed to deploy tactical intelligence, subspace agility, weapons fire, its onboard air wing, battle group command, and strategic connectivity in a unified plan to degrade and destroy the foe. Tactically, the Erebus depends on nothing.

Implicitly, the Erebus is meant to duel - and win against - small groups of Sathanas juggernauts.

Armed with a WINTER KING long-range spinal beam cannon, an ICE QUEEN secondary main beam, an array of anti-warship beams, a battery of massive pulse weapons, a comprehensive CIWS close-defense suite, selectable-load SARISSA-M1 torpedo launchers with subspace attack capability, and an active armor suite tougher than the Colossus, the Erebus is a killer. Her weapons layout suits her role as a door-kicker, plunging into formations of smaller warships, but she can also outrange a Sathanas juggernaut for as long as necessary to defang its weapons.

But a modern Alliance admiral asks about the weapons last. The platform's truly revolutionary capability lies with her tactical systems.

Communications systems built to the Alliance's BACKBREAKER standard provide common operational capability in the face of most jamming, but the Erebus also boasts a command theater for battle group coordination in non-permissive comm environments. The Erebus' informational weapons systems are built to partner with a Titan-class destroyer, incorporating the Titan's air wing and battle group into force awareness. When multiple Erebus-class destroyers operate in the same theater, BACKBREAKER can designate a group leader or coordinate a flat, decentralized operational schedule which intelligently distributes tasks across the Erebus battle groups. Future upgrades may integrate AWACS capability directly into the destroyer.

The Erebus' primary design tradeoffs lie in her fusion drive, air wing, and logistics. As a line combatant, the Erebus carries few strike craft. She is as fast as a Sathanas, but no faster, relying on her subspace drive to keep the range. And while tactically independent, the Erebus requires more logistical tail than many next-generation warships.

Cataclysm gave birth to Erebus. The death throes of the GTVA Colossus killed more than thirty thousand officers and crew — and an entire philosophy of warship design. The detonation of the Capella star wiped out not only a densely populated system, but an entire concept of strategic action. No more would the GTVA depend on monumental centerpiece combatants, designed to draw the enemy into a single set piece engagement and score a knockout blow.

The disaster left GTVA fleet doctrine in ashes. But the Alliance arranged its remaining assets, profiled available intelligence, and set to work. Next time apocalypse came knocking, they'd be ready.

The Threat Exigency Initiative was a crash-response program to the Shivan threat glimpsed at Capella. Fed by GTVI/SOC, the unflappable Space War College, and the grueling VEGADEX exercise series (which matched Alliance fleets against simulated Shivan opponents), the TEI program set out a series of short and long-term goals for Alliance military survival.

In the short run, the successful elements of the Capella-era military were enhanced. Deimos corvettes took over the old cruiser role. AWACS/TAG coordination saw renewed focus. Stealth fighters and pop-up missile doctrine became core elements of fleet training. The Hecate-class destroyer held onto its niche as mobile fleet base, providing logistics and carrier capability to the corvettes and strike craft that would in turn hold back swarms of Shivan bombers. Cheap new designs were requisitioned. This element proceeded smoothly: Capella had boiled most existing doctrinal disputes and contractor interests away.

But it would take something radically new to challenge an armada of more than eighty Sathanas juggernauts. And here there was room for conflict. Some factions pushed for an end to the destroyer class, moving to a doctrine of corvettes and light carriers. Others wanted supercarriers, or 'juggernaut destroyers', massive flying beam cannons with limited defensive capability.

Ultimately, a verdict was achieved. Supercarrier and Massive Mjolnir advocates would get an answer in the Titan destroyer. But something more was needed.

The Alliance needed a smart, agile, flexible line combatant: as tough as an Orion, as well-equipped to support battle groups as a Hecate, as terrifyingly quick to reposition as a Ravana, and able to both locate and exploit weakness in the enemy disposition.

Development began under the codename NIMBLE BASTARD, then moved to Admiral Armanjani's task force as LONGSWORD. The project foundered for several years under the curse of 'concurrency', a plan to build the hull and power systems, then gradually install new technologies as they were developed. But Armanjani successfully fought to delay both the Titan and Erebus projects until meson technology was fully mature. Soaring development costs were in part defrayed by quiet investments from the Vasudan Medjai, and the actual unit cost of the Erebus class remained within budget.

The Erebus emerged as a dream ship, poised on the edge of nightmare. Crammed with cutting-edge systems, the class has yet to prove its reliability in main combat. Some critics assert the switch from flak to pulse weapons will leave the vessel vulnerable to bombers. Other believe the sprint drive is a game of Russian roulette.

Examples of the class include Atreus, Orestes, Agamemnon, and Menelaus. Atreus, under Admiral Steele, has seen the most extensive shaking-down, but a minor scandal has developed in the Admiralty concerning Steele's refusal to obey politically desirable test parameters.

If the Erebus-class performs as expected, production will continue at full pace until the GTVA is satisfied multiple next-generation battle groups can rapidly respond to any new incursion. The Erebus will remain the spearhead of effect warfare for the foreseeable future...or until the doctrine fails.

This model took three years to make because Aesaar is lazy lazy lazy.

Named for Erebus, the Greek personification of darkness.

The Erebus is, sort of like the GTD Orion before it, a brawler. Unlike the Orion, however, it brings much more to the table than just raw firepower and good durability. It has pretty good point defenses, both for anti-warhead roles and anti-fighter/bomber roles. It's not slow by any means, at 25 m/s, and surprisingly maneuverable. Its secondary armament is incredibly versatile, doing serious damage to capital ships (and at a respectable range) while also being a serious threat to fighters and bombers...and having a modest ability to shoot down warheads. It has torpedo launchers, giving it all-direction attack capability, and it can launch SSMs--Subspace Missiles, which means that hitting a target with a TAG-C missile instantly summons an entire salvo of torpedoes to make a subspace jump to the target--this is why GTF Auroras are such a major threat in any mission you see them in. It boasts impressive electronic warfare capabilities (in-mission, this manifests in things like friendly warships being unable to use torpedoes). It can jump very rapidly, to the point where it can jump into a battle and then jump out of it a couple of minutes later. It's no slouch when it comes to taking punishment, and its firepower is quite impressive. In contrast to the Titan-class destroyer, it doesn't have massive forward firepower (though it still has quite a bit from its HBlue and BBlue that both face forward), but it can hit ships on both sides simultaneously with multiple MBlues and a TerSlashBlue. And while its strike craft complement is notably smaller than normal, it's still large enough to be respectable and adequate for its needs. All of this adds up to a simple conclusion: Erebus is a jack of all trades, with few shortcomings (its lower fighter/bomber complement being the only major one) and a whole lot of strengths. This ship will command the battlefield when deployed against anything short of a destroyer, and most destroyers would not fare very well against it. Its point defenses are strong, so trying to attack it with strike craft is a risky proposition--don't even think about approaching it or sending any strike craft against it without having a major numerical advantage. The Erebus shows its limitations when it has to face its Shivan counterpart--the SD Lucifer. When denied its ability to run after being forced to jump repeatedly, the Erebus still not going to go down easily, but it becomes vulnerable to the massive sustained firepower that capital ships like a Ravana, Lucifer, or Sathanas can provide.