The GTF Valkyrie is the mainstay fighter interceptor in the Galactic Terran Alliance's arsenal at the time of the Great War. Its predecessor was the GTF Angel.

Using the old GTF Angel Scout Fighter as a template, the GTA created the Valkyrie Interceptor Fighter. It has two additional engines, as well as an additional set of primary hardpoints. This makes the Valkyrie the best bomber interceptor in the fleet. Its speed is unmatched in the GTA, and its maneuverability is above average. Its only drawbacks are a small secondary payload and weak hull.

In Norse mythology, valkyries are minor female deities. They were tasked to choose the worthiest of those heroes who had died in battle, and deliver them to Valhalla, Odin's hall. 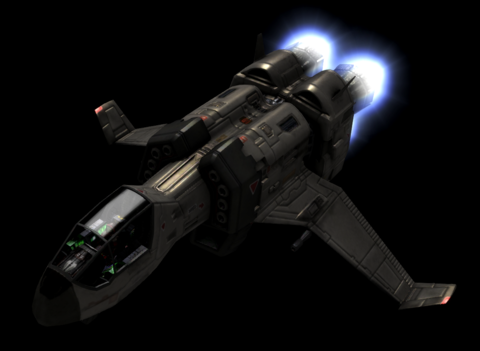 The GTF Valkyrie in the FSPort MediaVPs.

The Valk does its job, and does it well, but when asked to perform in another role it turns out to be disturbingly fragile. If the mission calls for extended dogfighting or attacking transports or military capital craft, you're probably going to want something sturdier.

Flies like a dream. You'll love the huge afterburner capacity with all power shunted to engines.

It is also noteworthy that AI pilots tend to drop like flies when piloting this ship, so don't expect much backup if you've been flying a long mission in a wing of Valkyries.

I found its guns' placements rather lousy, and the singular bay is really restrictive. Not to say it isn't a bad craft. It has an extremely high afterburner velocity, as well as larger reserves of the latter than its descendant. In addition, it has a smaller profile than the Perseus either. The Valkyrie would probably be a better interceptor, but the Perseus overall is a much better craft. The Valkyrie is simply too fragile, and restricted to interception and nothing else.

If you're going to fly this thing in one of the earlier missions in FS1 without shields, you'll come to learn the hard way about the poor placement of the Communication Subsystem. I don't know about anyone else having issues with the Comm SS being prone to a cheap shot, but be warned, have a support ship in the area if there's some mission critical dialogue going on in the middle of a dogfight (it shouldn't be there in the first place, but there is), or you're going to miss something important.

The top bank primaries are the outer two guns, and don't expect to hit anything smaller than a bomber with these. The second bank fires shots incredibly close together, originating from just under the cockpit, making this bank much more useful. Aim shots like you would the Herc. On Comm SS issues, don't let your front shield drop, or you'll find the Comm SS down to 20% or lower.

My personal favorite ship. The maneuverability is almost as good as the Ulysses, and its afterburner capacity is unmatched. The narrow guns in the center are very well-placed, as you can hit a target more directly, whereas the outer guns are more suited for larger targets, like large bombers, capital ships, flagships, etc. The best loadout in my opinion is Prometheus cannons in the gun banks on the wings, Avenger cannons in the nose guns, and either Phoenix or Interceptor missiles. It may be fragile, but if you fly it right, that doesn't matter. There has been no ship in either of the FreeSpace games that I haven't been able to destroy with the Valkyrie. Excellent ship.

It is more than capable to play through the main campaign on Medium. Above it, you'll need to be pickier about your choice of fighter, for the aforementioned durability and comm subsystem shortcomings.

If maximum afterburner velocity is taken into account, it is worth noting that, despite not making an appearance in FreeSpace 2, the Valkyrie is still the fastest Terran fighter ever produced, beating the much newer Pegasus stealth fighter by 5 m/s, and the second-fastest ship ever made by the Terrans or Vasudans, losing out only to the GVF Horus by 5 m/s.
Retrieved from "https://wiki.hard-light.net/index.php?title=GTF_Valkyrie&oldid=40849"
Category: