Shattered Stars is a stand-alone series of campaigns by Bryan See that is set hundreds of years after the events of FreeSpace 2 and Blue Planet.

It is 3018, 151,009 years since the end of the Second Cylon War, 683 years after the appearance of the Shivans at Ross 128 and the beginning of the Great War, and 651 years following the Capella supernova and conclusion of the Second Shivan Incursion.

Shattered Stars: A Deepness Within, to be released in 2019, takes place in a parallel reality where Terran civilization was decimated in a cataclysmic conflict on Earth years before the events of FreeSpace. The Vasudans are the sole galactic power, and are at war with the invaders. When the prophesied cosmic destroyers appear, one Vasudan pilot begins to gain insight into the greater forces at work in the fabric of the multiverse.

An untitled Shattered Stars sequel, to be released after A Deepness Within, is expected to focus on the Shivans.

A Deepness Within Teaser Demo

A Deepness Within Act 1

The Shattered Stars continuity begins in 3018, only 651 years after the Second Shivan Incursion. Following the GTVA's production doctrine employed between the Great War of 2335 and the NTF Rebellion of 2367, a number of Inferno-era ships are still used, although all ships from FS1 and FS2, by contrast, have been phased out. Ships in active production are determined by their age, longevity, popularity among pilots, practicality and irreplaceableness. Repeated encounters by the UIMS have allowed the GTVA to evaluate and adopt them, making it possible to reduce the size and increase the performance, firepower and longevity of their ships.

In another universe where the Terrans were brought to near extinction after having developed space travel due to the cataclysmic conflict (see Mortal Engines), the Parliamentary Vasudan Empire was the sole galactic power. It was transformed into a larger entity known as the Vasudan Imperium under Khonsu II. The Parliamentary Vasudan Navy was reorganised into the Imperial Vasudan Navy (IVN).

The Vasudan Central Intelligence serves as the intelligence-gathering arm of the IVN. 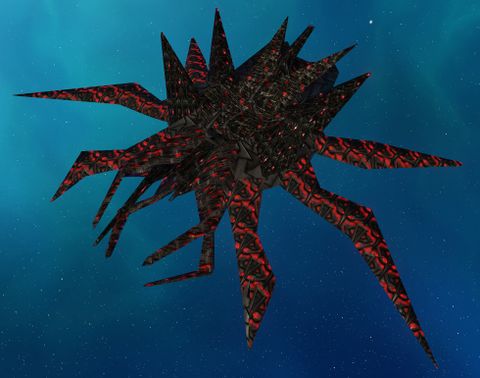 The Shivans are the cosmic destroyers as depicted by ancient Vasudan prophecies.

The Unknown Intellectual Mechanised Species, or UIMS, sometimes known as the Live-Weapon, are one of the new species introduced in Shattered Stars. They describe themselves as uncounted number of evolved Battle Machines in various sizes, composed of inorganic substances. There are several groups with different evolutionary lines, and the three groups found are called "UIMS", "UIMSδ", and "UIMSΩ", respectively.

At least thirteen classes of UIMS warships have been encountered so far, ranging from gunships to superjuggernauts.

To date, the UIMS possesses a staggering amount of fighter and bomber classes.

The UIMS are the second or third species ever encountered by the Terrans and Vasudans to already demonstrate beam capability. The two most powerful of these beams are mounted only on warships, while the lighter, smaller beams are mounted onto the fighters and bombers. UIMS beam weapons out-range and out-damage Terran or Vasudan equivalents by a significant margin.

One of the new species introduced in Shattered Stars, the Battura are a race of life-forms originated from the different dimension. They invaded several dimensions via an object known as the "Dark Planet," which has the function as a subspace gate like the Knossos.

Battura weaponry lack diversity as compared to Terran, Vasudan and even Shivan weaponry.

The Bosconians are one of the new species introduced in Shattered Stars as a race whose culture is similar to that of a space pirate. Excellent in stealth technology, their spacecraft are unable to be detected by sensors unless they approach.

The Sadeen are one of the new species introduced in Shattered Stars as a race with a highly-advanced civilization similar to the Terrans and Vasudans, and the Ancients before them. Their appearance is similar to the average Terran.

The most commonly seen Sadeen spacecraft is designated the SaF Rotelibelle.

Originally Shattered Stars started off as an original project by Bryan See in 2014 to act as a stealth interquel and sequel of sorts to the 2012 Total Recall film, whose universe was used as its setting. It became almost too large and too ambitious as many engine features were being added and tested, including Physically-Based Rendering, Unicode text support, and SDL2 support, to name a few. It was retooled many times, even becoming a total-conversion that do not require FS2 Retail. Then, in 2018, two campaigns were released: Trimurti, a mod that allows players to play as Shivans, and the first release of Inferno: Nostos. It was at that point he got the idea for what has become the current iteration of Shattered Stars, a mod that is set thousands of years in the distant future of the FreeSpace universe.

Bryan See is the only team member.