From FreeSpace Wiki
(Redirected from Deimos)
Jump to: navigation, search

The GTCv Deimos was a common ship in FreeSpace 2, in the hands of both the Galactic Terran-Vasudan Alliance and the Neo-Terran Front. Faster and more maneuverable than destroyers, but with more firepower than cruisers, these ships, along with the GVCv Sobek, filled a much-needed role in between these two classes. Their armor is made from collapsed-core molybdenum, which provides additional protection against beam fire, and giving them around 80% of the hull strength of the much larger Orion and Hecate destroyers. Their reactors are highly efficient Vasudan models, which give them the power output required to maintain their many beams and other turrets.

Deimos-class corvettes, such as the GTCv Actium and the GTCv Lysander, are the newest addition to the Terran fleet. These sleek, ultra-modern warships are the products of a new era of ship design, maximizing maneuverability and firepower. Their hulls are strengthened with collapsed-core molybdenum sheathing for better protection against beam fire, and their Vasudan-designed reactor core provides more energy per ton than any other allied ship class. As the Leviathan and Fenris cruisers of the Great War are gradually phased out, these corvettes will become the foundation of tomorrow's fleet.

In Greek mythology, Deimos was the personification of terror. He is the son of Ares.

Turret placements in the Gallery 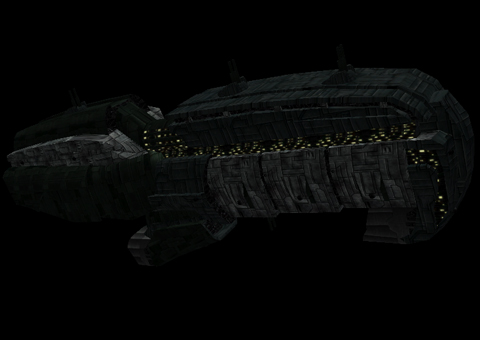 This is probably the best corvette in the game. It may not be small, or have a fighterbay, but it's got the firepower while still balancing anti-fighter capabilities. These ships make a fine addition to the GTVA fleet.

Realistically, while the Deimos is nice, its four heavy beams are the inaccurate slashing type which makes the statement that it's as powerful as a destroyer kinda... debatable. It's probably accurate to say though, that its anti-ship capabilities are better than the other corvettes. Its anti-figher defenses are formidable if approached without caution, but entirely useless if one approaches from the correct angle (from the front or above).

Think of the Deimos as a bigger, meaner version of the Aeolus. Your best approach is from dead ahead, even though that risks getting hit by an errant slash shot and being instantly vaporized. Side approaches must deal with an AAA beam, flak gun, bomblets from the side-mounted Piranha launcher, two Terran Light Turrets, and possibly some number of Terran Heavy Turrets. A stern approach borders on suicide, with two AAA beams, two flak guns, and bomblets from both Piranha launchers.

Although the Deimos lacks the raw firepower of Orions or Hecates, it is far more balanced in weaponry. The Orion, for instance, is vulnerable to bombers, and a Hecate to enemy warships, whereas a Deimos can challenge both large and small targets.

Probably the most dangerous capital ship to attack in a fighter or a bomber, and its 4 smaller anti-warship beams compared to the Sobek's 2 larger VSlash beams means Deimos can take more damage than the Vasudan corvette while remaining effective.

The best method of attacking this vessel is from the top, where it is guarded by only a few blob turrets; any other angle leaves you at the mercy of a storm of flak or staring down the business end of two possibly firing TerSlashes. Depending on the angle at which it engages, the Deimos can take down any ship its own weight or below, but is terribly vulnerable to a destroyer broadside.
Retrieved from "https://wiki.hard-light.net/index.php?title=GTCv_Deimos&oldid=63448"
Category: