Luyten Civil War is a FreeSpace Open-dependent military campaign. The story takes place three years after the destruction of Capella. 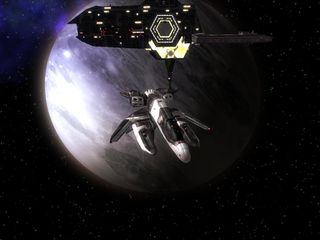 An Ezechiel-class fighter escaping from an Arcadia station.

Capella happened. Not only did the GTVA lose an entire system, most of the 3rd Fleet, but there are innumerable Capellan refugees left homeless by the cataclysm. The GTVA General Assembly hurriedly passed an act to facilitate sheltering the refugees in far-away systems, including Luyten. At first, the Luytenian Government, presided by the controversial Chancellor McCleskey, saw great potential in the new arrivals. They hoped that the influx of able-bodied workforce would help fix the declining regional economy.

However, the demographic shift turned out to be unfavorable. Within months, Luyten suffered its deepest economic crisis in its history. The populace blamed the Capellans and the ever-unpopular McCleskey government for the recession. The GTVA General Assembly would be willing to interfere with the McCleskey government's internal affairs, but the Beta Aquilae Convention grants them with no such power. Before BETAC could have been accordingly amended, the ruling government suffered a devastating defeat in the elections. The new Chancellor is Edward Keyes, who is determined to "purify" Luyten of its unwelcome guests and to enact unorthodox economic policies to cure the recession. Emboldened by sweeping popular support, the Chancellor announced that Luyten no longer recognized the GTVA's jurisdiction.

When it appeared that the crisis could be solved through diplomacy, three high-ranking GTVA dignitaries were abducted and stoned to death in daylight by an angry mob of anti-Alliance protesters. Peter Lindres, Special Operations Command, submitted a report the next day, showing indisputable evidence that Chancellor Keyes knew about the abduction, but let it happen. To make matters worse, intelligence reports that news of the diplomats' deaths was welcomed by extremist underground movements in Laramis and Barnard's Star as well.

Fearing that prior events would trigger a domino effect, the GTVA Security Council assembled and voted in favor of a forceful military intervention to Luyten. Their goal: get rid of Keyes and his closest associates.

For a more detailed chronology of the story background, see the dedicated ModDB article.