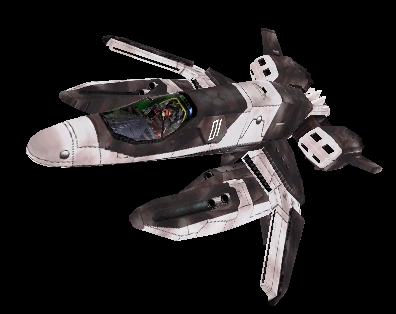 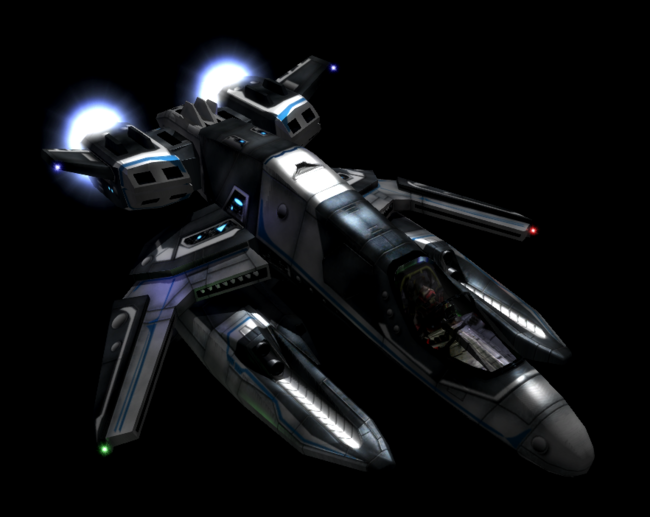 The GTF Nyx in Blue Planet. 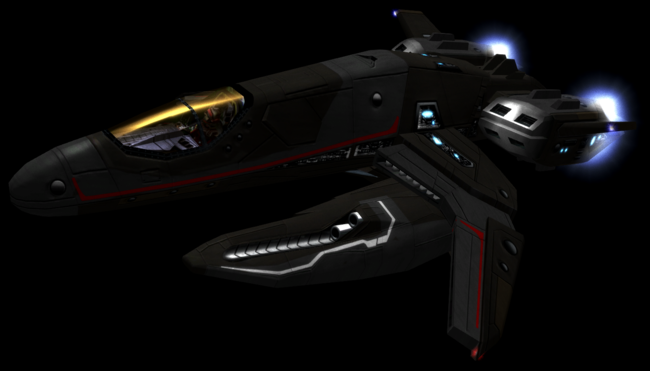 An SOC variant, which is faster and more maneuverable, has a higher energy refill, and can mount the Maxim, at the expense of reduced total weapon energy and shields. 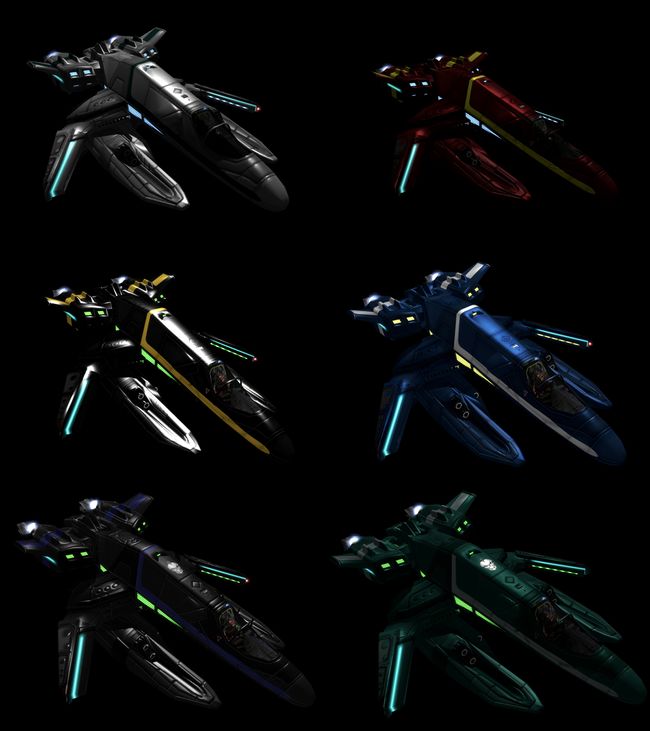 Several retextures of the Ezechiel.

The Ezechiel has been recently introduced as the next space superiority fighter to be assigned to the top squadrons of the GTVA. With its origins shrouded in mystery and its impressive performances and weaponry, it's already a favourite among pilots, and is claimed as being the successful child of a Perseus and an Erinyes.

Fresh from the drawing board, the advanced GTF Nyx is one of the newest GTVA heavy fighters. It was commissioned in 2385 as a response to increasing fighter losses to superior UEF fighter designs. A dedicated gunship killer, with heavy armour and firepower, this fighter has become the bane of many a UEF pilot. It marries the Erinyes' eight gun banks with the agility and versatility of the Perseus interceptor, producing a sterling design that has become a pilot favorite. Extraordinary cost, however, has slowed its planned deployment.

When the GTF Nyx was commissioned in 2385, it did not take long before several GTVA elite line squadrons came to complain about the poor engine performance and reduced afterburner longevity of the brand-new Nyx heavy fighter. Consequently, the GTF Erinyes remained the fighter of choice for many of the GTVA's elite pilots who deemed having an advantage in speed and compatibility with the Maxim cannon to be of more importance than the stronger shields and larger missile banks of the equally maneuverable Nyx. Alarmed by these assessments and in accordance with the Threat Exigency Initiative, the GTVA contracted Triton Dynamics to design a faster and more maneuverable Nyx heavy fighter, capable of mounting a wider array of primary weapons. While this new design offers increased speed, greater maneuverability and improved afterburner consumption rates, it sacrifices some of its durability and can store less weapons energy in its capacitor. These shortcoming, however, are largely compensated for by a newly designed and experimental power plant capable of replenishing both shields and primary weapons more rapidly. Currently, the new Nyx variant is undergoing its OpEval period and only several elite line squadrons and SOC units are authorized to pilot the expensive variant of the Nyx heavy fighter.

Inferno Nostos's GTF Ereshkigal is a different model based on this design.

What can I say? One of the most SEXIEST ships I've ever seen! Man, 8 primaries can takeout almost anything very quickly...Would be nice if it came in a full packet. (EDIT: Yes! found the file with the TBL and shield info! I recommend you turn 3d loadout on.)

Actually quite an old user-made ship. It has aged well, though is slightly unoptimized by current standards.

If anybody ever had anything bad to say about the GTVA's earlier heavy fighters, they will fall silent upon seeing and flying this ship. Not only is it agile and durable enough to handle most fighters, it also has the speed, firepower and weapons compatibility necessary to fly as an interceptor or heavy missile boat. As always, the presence of eight gun banks means that attempting to mount dual Kaysers is not exactly the best idea in the world.

The bane of many a UEF fighter pilot, especially annoying when they tear up behind you spamming Balors.

It's not quite as maneuverable and not nearly as fast as a Perseus, but it's every bit as deadly as an Erinyes. It's slightly more maneuverable than an Erinyes, with a smaller overall target profile, a much better reactor, more hitpoints, and more (and faster regenerating) shields. When using this fighter, remember that it turns much more quickly "right and left" than "up and down". The Nyx has an enormous power output; higher than any other Alliance - high enough to mitigate worries about primary efficiency even in high-difficulty settings; take all Kaysers if you have to in order to end the fight quickly. The afterburner is good, and recharges quickly. When fighting a Nyx, try to approach from the top or bottom, and use any speed, range, or maneuverability advantage you have. Even a Uriel will get heavily damaged in a head-on exchange with a Nyx, so avoid it.

In Aristeia, you get a chance to fly the Nyx in Blue Planet, and it's a rewarding experience if you're good at flying heavy craft. Shame you couldn't fly it with Trebuchet missiles, otherwise, that mission would probably be as easy as cake. 128 Tornadoes plus about 1.5x-ish the energy capacity of the GTF Ares can turn the tide in dogfights. Do not hesitate to take Balors instead of those tempting Kaysers in higher difficulties, because of the energy consumption rate.

An incredible fighter that the GTVA has been wanting ever since the original Hercules became outdated. Fantastic primary firepower, with excellent placement and good flexibility. Great secondary capacity as well, which is split into two large banks for a welcome degree of versatility and personalization in loadout. Good speed, especially with afterburners, and good enough maneuverability to truly dogfight with all but the most nimble and deadly of fighters. On top of that, its durability truly is that of a fairly heavy fighter. In the hands of a skilled pilot, this craft is very deadly against most foes and is the one of the GTVA's fighter classes that makes everyone very, very afraid. Good thing for the UEF that there aren't too many of them yet, due to (understandably) high production costs.

The SOC variant is BP canon as of War in Heaven Act 3 — they are encountered during Eyes in the Storm.