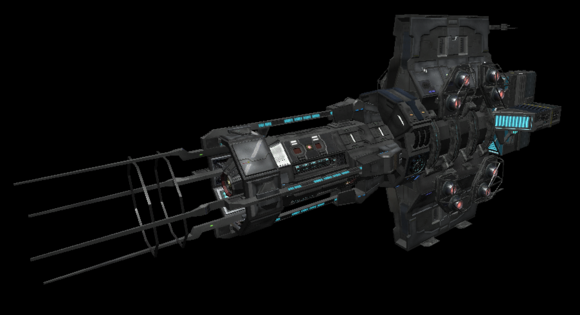 Redeployed by the GTA at the 2334 in large numbers to the Outer Rim, the Agneya started as Explorer-class mining vessel before the Great War. Pretty obsolete and mostly civilian design was used to hasten rebuild Alliance fleet after the Great War. After Outer Rim Syndicate rebellion and transformation of GTA remnants into EFN, majority of these tough vessels remained in Outer Rim and were quickly posessed by newly formed Syndicate. While most of them were decomissioned in favour of mining drones and Hehpaestus Industrial Ships, some Explorer-class vessels remained in civilian market and continue to work for some corporations. When the Shivans attacked, the Syndicate decided to choose heavy mining-variant of the Explorer, with heavy armor to work in dense asteroid fields and use it as a baseframe for new weapon against shivan destroyers.

With extremly large, oversized, long-range variant of the standard Maul-class Heavy Rail Cannon placed instead of mining device, the Agneya saw the battlefield for the first time. Almost defenceless against shivan bombers, mining armor was upgraded to cruiser standard, to hold at least one or two waves of shivan bomber raids and let Agneya deal a punch against shivan capital ships. Despite almost no-existing anti-fighter and anti-bomber screens, the Agneya become one of the most effective weapons in ORS arsenal. When protected properly, this 800-meters long frigate can deal enormous amount of damage from safe distance, without risking of being smashed by main beams of shivan destroyers.

Both Agneya and the FTFf Impervious from Dimensional Eclipse mod are based on the same old model, from now defunct Project: Outreach mod. Started as a kitabash of various models like SolCommand's Narlokian Gate, original model was later remodelled by mod team working on DE. No matter the fact that Droid803 refused to share original mesh, another mod team working on Exile project recreated model from scratch and later used it as artillery frigate. Droid803 appreciated final result. 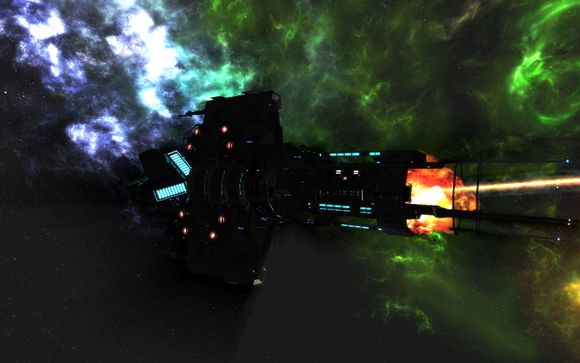 Escorting this thing is a nightmare. Despite being a 800-meters long warship, Agneya has only six defense turrets, and four of them are blob turrets useful only against incoming bombs. Two swarm missile launchers are effective against light fighters and shield-stripped bombers, but doesn't add much to it's defensive potential. Description lies about it's lighr armor. Agneya in fact has only one quarter less hitpoints than Orion, but she will fail quickly without strong fighter cover. Another problem is her rotating device that may smash escorting fighters, but also hostile ones. Agneya is also almost useless in close range combat against cruiser- and corvette-sized warships. The only advantage this ship have is her spinal and only railgun weapon with extreme firepower and even more damage. At long range combat, Agneya may nullify the cruiser-sized targets with only few shots. Turret is also heavily armored and protected from enemy fire with large targeting device and the hull itself, so you don't have to be afraid of her main weapon. Exile frequently demonstrate full potential of the Agneya as she is always deployed outside the range of beam cannons of enemy warships. Watch for bombers, heavy fighters, guard this thing well and you will surely win even against destroyer-sized targets.