From FreeSpace Wiki
(Redirected from Demon)
Jump to: navigation, search

The SD Demon is a Shivan destroyer that was first encountered by the Terrans and Vasudans during the Great War. During that time, it was the only class of destroyer-type vessel belonging to the Shivans that accompanied the SD Lucifer. While the Demon lacks the planetary bombardment capabilities, hull strength and sheath shield system of the Lucifer-class, its cavernous fighterbay, capable of holding up to two fighter squadrons, as well as its numerous turrets, makes it a threat to any ship in the Galactic Terran Alliance and Parliamentary Vasudan Navy.

During the Second Shivan Incursion, the Shivans were known to have deployed at least one Demon-class destroyer against the Galactic Terran-Vasudan Alliance. Skirmishes with these vessels have revealed that, in the thirty-two years since the Great War, the Shivans have strengthened the hulls of these vessels and equipped them with beam weaponry.

The Demon's most significant failing is in the placement and durability of its engine subsystem, which can be easily neutralised by a bomber strike, rendering the destroyer immobile.

While the Demon-class Destroyer is easily one of the most massive ships we have yet seen, it is not the biggest or most powerful in the Shivan armada. However, it is still quite dangerous, with a plethora of missile turrets and two full squadrons of fighters. It is suggested that these capital ships be destroyed by bombers, as all cruisers that have attempted to engage a Demon have been destroyed.

The Demon is a Class A threat in any allied system.

The SD Demon class of Shivan destroyers is much smaller than the Lucifer class but very heavily armed and extremely dangerous. Demons are known to carry numerous wings of fighters and bombers. 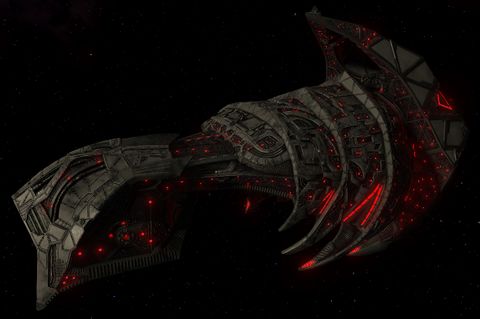 The sheer number of missile batteries on a Demon can make it very annoying indeed in FS1. In FS2 these missiles are less of a threat, and the positioning of the Demon's flak guns and AAA beams makes it possible to knock out one weapon and leave much of that side of the ship defenseless. Unlike the Ravana, however, expect the Demon to take some severe punishment before it goes down. Also expect those main battery turrets to take severe punishment before being knocked out.

The Demon's hull strength increases sixty percent between FS1 and FS2. The ship's beam weaponry is relatively weak (two LRed and one SRed), so apparently [V] increased the Demon's hit points at the last minute to make it superior to the Hecate and Hatshepsut.

This ship is slightly less capable at taking out fighters than the Hecate and Hatshepsut due to its less numerous anti-fighter turrets, but it is more capable in an anti-capital ship role than any GTVA destroyer if properly positioned.

The Demon appears to be more of a defensive destroyer, given that its main guns, the two LReds, are not forward-facing. An easy target if attacked from the front.

Do not underestimate the firepower of this destroyer. If its front beams aren't disabled quickly, even a Sobek-class corvette won't survive for very long in its sights. Trust me, I saw what happened to the Thebes when I failed to blow them up fast enough on the lowest difficulty level. The Demon may only have one SAAA on either side of it, but they have a full field of fire to the front and sides. Furthermore, you don't even know where they are until they hit you... and then, it may be too late. Also note that Demon-class warships tend to get disabled fairly easily because of their large and relatively weak engine subsystem, which can be neutralized by just one and a half Helios.

The Demon actually has more firepower than the Lucifer in FS2, which only has 2 SReds.

In FS1 there's a big undefended blindspot inside the "tentacles", leaving the weapons subsystem unguarded by blob turret fire. This just happens to be right next to the fighter bays, however, so be careful. In FS2 the flak batteries provide at least some cover to this area.

Arguably roughly comparable to the Orion - the significantly increased refire rate and firing time of the SRed and LRed over an Orion's BGreens means an FS2 Demon can maintain surprising anti-capship damage output. It is, however, easy prey for bombers with decidedly poor anti-fighter defenses by the time FS2 comes along.
Retrieved from "https://wiki.hard-light.net/index.php?title=SD_Demon&oldid=63047"
Category: