It is unknown what D.H. stands for, but some HLP members have suggested "Dark Hull" and "Death Head."

The GTB Artemis D.H. is an experimental variant of the standard Artemis class. The most notable change is that the Artemis's factory-issued Han-Ronald engines have been replaced by the same Nankam NA-27f powerplant now found in the GTF Ares fightercraft. The D.H. variant is faster and more maneuverable than the standard Artemis bomber, at no cost to armor or armament. During the OpEval period, Artemis D.H. bombers are being deployed in only select squadrons in different theatres of the war. If the evaluation trials go well, wider deployment of the Artemis D.H. class is expected. 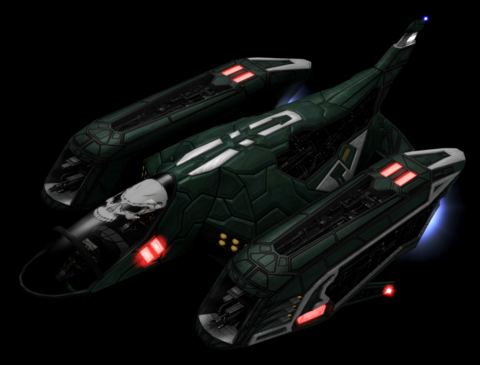 While many pilots, myself included, swear up and down that the Artemis D.H. is superior to the Artemis, this is, as Setekh has termed it, the "placebomber" effect. The only functional difference between the Artemis and Artemis D.H. is their texturing, as examination of the table files shows.

Besides multiplayer weapons compatibility, there is one minuscule difference in the model. The DH Artemis has only three tail fins. The standard has four.

Many mods decide to improve this ship's turn rate, speed, energy reserves or shields as a result of the improved powerplant the D.H. is supposed to have.
Retrieved from "https://wiki.hard-light.net/index.php?title=GTB_Artemis_D.H.&oldid=40716"
Category: