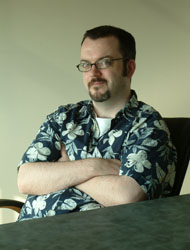 In February 2011, Volition employee Jason Scott, lead writer of FreeSpace 2, revealed many of the developer's plans for the future of the FreeSpace universe in an interview with community member Battuta. A transcript of this interview is provided below.

The canonicity of the information provided by the interview is heavily debated, but common consensus within the community holds that while it provides some intriguing information in regards to Volition's original intentions, campaign designers can feel free to ignore or use it as a guideline as they wish.

What was it like working with Ronnie Cox and Robert Loggia? Were they awesome? Who voiced Terran Command, and why was he so good at it?

I didn’t actually work directly with them. I believe someone at Interplay handled the voice recording in LA, but I did work with the actors in Champaign and in Chicago. Terran Command was voiced by Roger Cooper, who hosted a classical music program on the local public radio station.

How did you arrive at FreeSpace 2's story from FreeSpace 1? What were your inspirations, what did you want to fix and improve or just change? How did you create Bosch, and where can I learn to write monologues that good?

For FreeSpace 2, we had to work within tight constraints. We had to use most of the original FS1 assets, no action cutscenes, no new species and nothing massively ambitious.

Our new features were beam weapons, bigger capital ships, and the nebula. Wanting to have a nebula drove a lot of the story decisions. To drop the player in the middle of a nebula, we opened up a new region of space. The Knossos device became the means to access that space and gave us the chance to flesh out the ancients a little more. Because nebulas are the remnants of supernovas, that played a key role in the story as well.

Bosch came into existence because we wanted to give the player something interesting to do before the Shivans returned. Many leaders in history rise to power by exploiting old hatreds, and that’s what Bosch did. Specifically, at the time I had been reading about Bosnia and how leaders like Milosevic, Karadzic, and Mladic had incited people to butcher their neighbors after decades of peaceful coexistence.

Bosch dropped hints about his grand design, about an alliance with the Shivans being the key to mankind's survival. What inspired you to make the Shivans something more than xenocidal space monsters?

Obviously you folks know that we exist, but a lot of approval-hungry forumites would like to know if you've followed the progress of the Source Code Project. Has anyone at V played any of the fan-made work for FreeSpace Open? How does it feel to see your engine used as a platform for mods like The Babylon Project or Diaspora that reach entirely new fanbases?

I feel much better about FreeSpace’s obscurity and lack of commercial success knowing that this community is out there. Games are such a disposable medium—people play a title for a few months, maybe a few years, but it’s rare to see a game live that long. It’s not like books that are read and reread for decades and even centuries.

I retired my flight stick a long time ago, but this interview has got me thinking about going back and playing more of the fan work. What do you recommend?

In an interview more than a decade ago, you said that heterodoxy was good, and that the FreeSpace mythos could support all sorts of stories even if the canon campaigns themselves pressed for a grim, intentionally depersonalized narrative. The community's clearly taken that to heart; many of the most popular FreeSpace campaigns use speaking protagonists, or venture into genres like horror. Would you stand by your words, or do you feel that the FreeSpace universe and game design lend themselves best to a particular style of narration?

I think if we were to make a FreeSpace game now, you would probably see a lot more character depth and development. We made a stylistic choice at the time, and it kept us very focused.

FreeSpace content regularly boasts download numbers that, even today, approach the first-year sales of FreeSpace 2. Why do you think the community has been so successful? Would you encourage other developers to release their source code?

FreeSpace has a robust toolset, a relatively focused gameplay experience (with no need for world geometry), and a mystery that a lot of players found compelling. I think the minimalist approach we took to the storytelling left a lot of room for people to carve out their own space in the fiction, and the Shivans were interesting enough that players were inspired to do so. As far as encouraging other developers, I think it made sense for us to release the source code when we did. If we were still making FreeSpace games on that engine, chances are that would have happened much later.

Why did the Shivans destroy Capella, anyway? Why a supernova?

My theory at the time was that the Shivans were collapsing stars to form new jump nodes, but I don’t have any proof.

Do you think Bosch survived his encounter with the Shivans? Was he delusional, or did he know something we don't? Why did the Shivans board the Iceni violently, but take Bosch and his command crew alive?

I don’t know what happened to Bosch, but I think it ended very badly for him. The existence of the communication device would have prevented the Shivans from killing him at first, but then what? Imagine that you invented a machine that let you talk to bears, but you couldn’t be exactly sure what the machine was saying. It might be telling them, “I am delicious.”

Was there a plan for a FreeSpace 3? How firm was it? How long after FreeSpace 2 do you see its narrative picking up?

We wanted the humans and Vasudans to go on the offensive and attack the Shivan homeworld. We referred to it as “Shivantown.” Beyond that, we didn’t really have anything concrete.

Would a reunion with Earth have figured into FreeSpace 3? Maybe providing the non-Shivan antagonist?

Yes, we probably would have reverse-engineered the Knossos device and gone back to Earth.

To answer your question, work had started on an expansion pack for FS2, but it got killed pretty early on. I think it might have been about returning to Earth, but I really don’t remember.

We had a sense that the Shivan fleet in FS1 was a scouting party—searching for stars suitable for blowing up and cleansing the space of biological life. The Shivan fleet in FS2 then came in to collapse the stars and open up the new nodes to Shivantown. Now what come through those nodes is anyone’s guess—perhaps factories that churned out new ships to continue the cycle. I felt that the Shivans were very, very old and had been at this for millions of years perhaps. Maybe they outlived their original purpose and were living out these endless loops of destruction and creation long after their creators had died off. Or maybe the master race was still alive and aware of what they had unleashed.

I spoke to an ex-Volition FreeSpace 2 modeler recently who indicated the Ancients were planned to make some form of return; would we have seen them alive and well, flying about, or would it simply have been more Ancient artifacts?

We had talked about bringing the Ancients back as a new species. We never got far enough along to work that out.

Any idea of what there was past the third Knossos in the binary star system that we visited with Snipes?

Not specifically. We wanted to continue opening up the FreeSpace universe. Between the Knossos devices and the collapsing stars we had all kinds of potential for new regions to explore that would have been previously unknown to the GTVA.

Would the Shivans have ever been defeated? Would their motives have been revealed? Or were they more effective as an unknown - 'never show the monster'?

I suppose the Shivans would have survived as long as we kept making FreeSpace games. I’m not sure if was better to end the franchise on a cliffhanger or end FS2 with a more definitive, satisfying conclusion. I’ve regretted not providing more closure at the end, but maybe that’s why people are still playing the game 10 years later. The mystery is often more compelling than the answer.

Did you have an ending in mind?

For me or for the game?

FreeSpace 3: what are the odds? (Red Faction Guerilla and Saints Row are both great fun, by the way, and we loved and cherished all the FreeSpace nods.)

There’s always hope. Not much, but it’s there. Glad to hear you’re enjoying Red Faction and Saints Row!