From FreeSpace Wiki
(Redirected from GTA)
Jump to: navigation, search 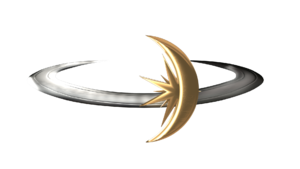 The GTA logo by MjnMixael

In early versions of FreeSpace, several names were used for the Terran faction before the final name was decided upon. Early names included the acronyms "ITA" and "TEF". These names are generally regarded to be non-canon. The space-based military was also referred to as the Galactic Terran Navy (GTN), but only in the FreeSpace Reference Bible. Because it is never referred to as such in-game, this name can also be considered non-canon.

The Terran civilization, originating on Earth, the third planet of the Sol system, had developed to the point of relatively stable nation-states. Following breakthroughs in space travel and the discovery of subspace, material and technological growth were matched by philosophical and spiritual advancements. As space exploration continued, the nation-states of Earth coalesced into the planetary state, which in turn evolved into the interstellar state, which ultimately led to the creation of a galactic-state: the Galactic Terran Alliance.

The chief ideology behind the rapid exploration of the galaxy was known as unified expansionism, a policy that was successful in fueling an ever-growing economic and political power. By 2335, despite an ongoing war with the Vasudans, the GTA had been successful in colonizing twelve extrasolar planets and establishing outposts on fifteen other planets and moons throughout the galaxy.

Before circa 2321, the Galactic Terran Alliance first encountered the Parliamentary Vasudan Empire. Regardless of the circumstances of the Terrans' first contact the Vasudans, by the year 2321, the Terran-Vasudan War had broken out. The exact cause of the war isn't revealed, but the FS1 techroom entry claims that one of the main factors was a Terran mishandling of "The Conversation," a ritual of the Vasudan language. Cultural dissonance may also have been a cause of friction; the Vasudans were viewed by the Terrans as being treacherous, arrogant, superstitious and ritualistic. Terran aggression and paranoia (whether real or perceived) may also have been a contributing factor.

After fourteen years of seemingly endless war, a previously unknown race known as the Shivans attacked without warning. Encounters with the Shivans occurred in numerous systems, including Ross 128, Ikeya, Antares, Beta Cygni and Vega. Encounters with this new enemy were disastrous for both the GTA and PVN forces. After suffering serious casualties, the PVN approached the GTA with a motion to sign an armistice in order to fight this new foe. Already having lost the GTD Amadeus, Terran Command agreed, signing the armistice and ending the fourteen-year Terran-Vasudan conflict. These two former foes would now cooperate in many ventures, such as science and engineering to defeat the newly discovered Shivans.

Ross 128 had already been lost, Betelgeuse, Beta Cygni, and Ribos also fell to the Shivans' superiority. When the Shivans took Antares, it became clear to the GTA that if the Vasuda system were to fall, the Vasudans' war effort would be fatally crushed. In the effort to defend Vasuda from the mighty Shivan fleet, multiple destroyers engaged Shivan forces in both Deneb and Antares. With the destruction of the GTD Galatea, nothing was left to halt the progression of Shivan forces into the Vasuda system. After arriving, the SD Lucifer bombarded Vasuda Prime, killing billions of innocent Vasudans after fourteen hours of incessant bombardment.

With the destruction of Vasuda Prime, Terran Command feared the Shivans would now move towards Earth. If it had not been for the Vasudan refugees who found the Ancient records, Earth would have also been annihilated by the Shivan superdestroyer. Thanks to the successful extraction of the Ancient data, Terran Command now possessed the knowledge needed to defeat the SD Lucifer and halt the Shivan advance. After being pursued by the GTD Bastion and later a small contingent of fighters and bombers, the SD Lucifer was destroyed in the subspace tunnel between Sol and Delta Serpentis, causing the jump node to collapse, and ushering in a new era for the Terran race.

With the destruction of the SD Lucifer, the Shivan war machine crumbled, and the remnants of their fleet were defeated as the Great War finally came to an end.

Following the Great War and the loss of Earth, the GTA suddenly found itself without leadership. A provisional government was hastily formed in an attempt to organize the scattered and traumatized human race. It barely held together a fragmented and despaired people, and the only symbol of its authority, the military, was still licking its wounds after the Great War. The Hades Rebellion proved to be the catalyst for the collapse of the GTA. Even though the rebellion was defeated, the authority of the provisional government was in shambles, and humanity fell apart. The Galactic Terran Alliance was no more.

To fill the power vacuum created by the fall of the GTA, various independent regional blocs were founded, among them the Adhara Coalition, the Antares Federation, the Luyten New Alliance, and the Regulus Syndicate. These various blocs were the only semblance of order in the anarchic post-Great War period of Terran history. Eventually, the Vasudans began overtures of a formal union between the two races, leading to the establishment of the Galactic Terran-Vasudan Alliance.