From FreeSpace Wiki
(Redirected from Human)
Jump to: navigation, search 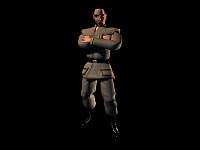 Terrans, or humans, are bipedal, carbon-based life forms that evolved from primates several thousand years ago on the third planet in the Sol system. They have an internal skeleton that supports and protects all their internal organs, musculature, and external skin.

Compared to Vasudans or Shivans, Terran are physically weak, able to lift only slightly more than their own body weight. Humans have circumvented this weakness by using their relatively compact and powerful brains to develop tools that give them advantages over their adversaries and the ability to manipulate/change their environments. The ability to reason and use logic has enabled this species to outsmart their competitors. The combination of intelligence and versatility has given the Terran species the flexibility it needed to adapt to the various threats it has faced, and allowed Terrans to evolve from tribal, nomadic primates (not entirely unlike their progenitors) to a spacefaring race.

In early versions of FreeSpace, several names were used for the Terran faction before the final name was decided upon. Early names included the acronyms "ITA" and "TEF". These names are generally regarded to be non-canon. The space-based military was also referred to as the Galactic Terran Navy (GTN), but only in the FreeSpace Reference Bible. 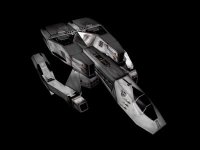 The Apollo fighter, an example of Terran engineering.

Terran ship design are utilitarian and easy to mass produce. Despite this, Terran design aesthetics have held to the military-industrial themes. Legendary warships like the GTF Apollo, GTB Medusa, and GTD Orion are considered by many to represent the finest in unadulterated Terran design. After Vasudan and Shivan technologies began being implemented, Terran design took a softer turn. Terrans ships such as GTF Hercules Mark II, GTB Artemis, and GTCv Deimos became sleeker and smoother.

Weaponry on Terran ships is very diverse, reflecting both Terran adaptability for different circumstances and the philosophy that pilots should be able to customize their loadout to their own tastes. All-purpose weapons such as the Subach HL-7, Avenger, and Prometheus are complemented by weapons that have a special effect upon their targets, like the kinetic effect of the Flail rifle and the energy-draining abilities of the Lamprey. Kinetic-energy weapons were widely used until pulse cannons were developed. Early energy-based weapons were distinctly gaseous in their aural signatures and visual identifications, due to the use of gases like argon and nitrogen used to intensify the laser pulses. Later weaponry used during the second Shivan conflict put more of an emphasis on plasma and electromagnetic weapons, such as the Circe.

Terran missile design is mostly dependent on brute force, rather than finesse. Heavy ordnance like the Phoenix line of heavy missiles and the Cyclops torpedo annihilate large targets, as Terrans prefer to use their primary weapons against smaller, faster targets. Many of the lighter missiles, such as the Interceptor, used by Terran fighters were only made possible through Vasudan improvements in aspect lock times and engine speeds.

The heavy beam cannons mounted on most Terran warships were first known to be mounted on the GTI's pet project, the GTD Hades, and was poised to overtake the surviving forces of the GTA and PVN towards the end of the Great War. The ill-fated rebellion of these engineers in their bid to overthrow the Galactic Terran Alliance apparently led to the development of the comparatively advanced weaponry. Many ship classes were refitted with these new weapons. But according to the tech room, this wasn't always practical. Several variants appear to exist, some firing a steady, unmoving beam, other "slashing" across the hull area of the target. These 'slash' beams maximize the spread of the beam fire on a wide arc across the target's hull, increasing the chances of disabling subsystems and turrets. Both Slash beams and Line-of-Sight (LOS) beams are standard by the time of the Second Shivan Incursion on Terran and Vasudan warships.